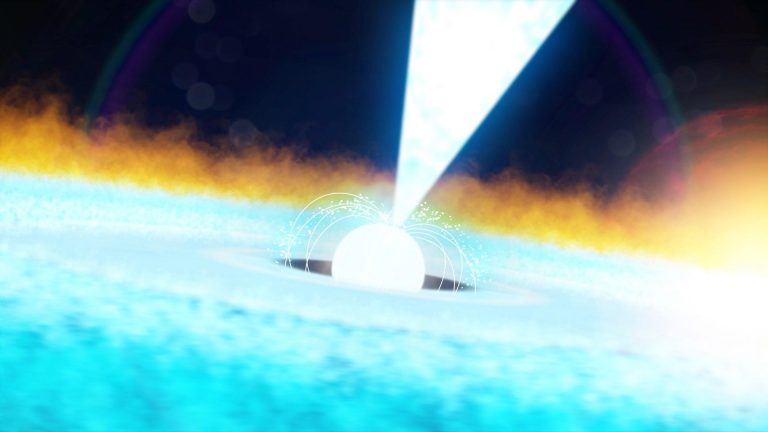 Illustration depicting a Type I X-ray burst. The explosion first blows off the hydrogen layer, which expands and ultimately dissipates. Then rising radiation builds to the point where it blows off the helium layer, which overtakes the expanding hydrogen. Some of the X-rays emitted in the blast scatter off of the accretion disk. The fireball then quickly cools and the helium settles back onto the surface. (Image: Chris Smith (USRA) via NASA's Goddard Space Flight Center)

NASA’s Neutron star Interior Composition Explorer (NICER) telescope on the International Space Station detected a sudden spike of X-rays at about 10:04 p.m. EDT on August 20. The burst was caused by a massive thermonuclear flash on the surface of a pulsar, the crushed remains of a star that long ago exploded as a supernova.

The X-ray burst, the brightest seen by NICER so far, came from an object named SAX J1808.4-3658, or J1808 for short. The observations reveal many phenomena that have never been seen together in a single burst. In addition, the subsiding fireball briefly brightened again for reasons astronomers cannot yet explain.

“This burst was outstanding.

“We see a two-step change in brightness, which we think is caused by the ejection of separate layers from the pulsar surface, and other features that will help us decode the physics of these powerful events.”

The explosion, which astronomers classify as a Type I X-ray burst, released as much energy in 20 seconds as the Sun does in nearly 10 days. The detail NICER captured on this record-setting eruption will help astronomers fine-tune their understanding of the physical processes driving the thermonuclear flare-ups of it and other bursting pulsars.

Below is a video showing a thermonuclear blast on a pulsar called J1808 that resulted in the brightest burst of X-rays seen to date by NASA’s Neutron star Interior Composition Explorer (NICER) telescope. The explosion occurred on Aug. 20, 2019, and released as much energy in 20 seconds as our Sun does in almost 10 days. Watch to see how scientists think this incredible explosion occurred:

A pulsar is a kind of neutron star, the compact core left behind when a massive star runs out of fuel, collapses under its own weight, and explodes. Pulsars can spin rapidly and host X-ray-emitting hot spots at their magnetic poles. As the object spins, it sweeps the hot spots across our line of sight, producing regular pulses of high-energy radiation.

J1808 is located about 11,000 light-years away in the constellation Sagittarius. It spins at a dizzying 401 rotations each second and is one member of a binary system. Its companion is a brown dwarf, an object larger than a giant planet yet too small to be a star. A steady stream of hydrogen gas flows from the companion toward the neutron star, and it accumulates in a vast storage structure called an accretion disk.

Gas in accretion disks doesn’t move inward easily. But every few years, the disks around pulsars like J1808 become so dense that a large amount of the gas becomes ionized, or stripped of its electrons. This makes it more difficult for light to move through the disk. The trapped energy starts a runaway process of heating and ionization that traps yet more energy. The gas becomes more resistant to flow and starts spiraling inward, ultimately falling onto the pulsar.

Hydrogen raining onto the surface forms a hot, ever-deepening global “sea.” At the base of this layer, temperatures and pressures increase until hydrogen nuclei fuse to form helium nuclei, which produces energy — a process at work in the core of our Sun. Goddard’s Zaven Arzoumanian, the deputy principal investigator for NICER and a co-author of the paper, said:

“The helium settles out and builds up a layer of its own.

“Once the helium layer is a few meters deep, the conditions allow helium nuclei to fuse into carbon. Then the helium erupts explosively and unleashes a thermonuclear fireball across the entire pulsar surface.”

Astronomers employ a concept called the Eddington limit — named for English astrophysicist Sir Arthur Eddington — to describe the maximum radiation intensity a star can have before that radiation causes the star to expand. This point depends strongly on the composition of the material lying above the emission source.

Co-author Deepto Chakrabarty, a professor of physics at the Massachusetts Institute of Technology in Cambridge, said:

“Our study exploits this longstanding concept in a new way.

“We are apparently seeing the Eddington limit for two different compositions in the same X-ray burst. This is a very powerful and direct way of following the nuclear burning reactions that underlie the event.”

As the burst started, NICER’s data shows that its X-ray brightness leveled off for almost a second before increasing again at a slower pace. The researchers interpret this “stall” as the moment when the energy of the blast built up enough to blow the pulsar’s hydrogen layer into space.

The fireball continued to build for another two seconds and then reached its peak, blowing off the more massive helium layer. The helium expanded faster, overtook the hydrogen layer before it could dissipate, and then slowed, stopped, and settled back down onto the pulsar’s surface. Following this phase, the pulsar briefly brightened again by roughly 20 percent for reasons the team does not yet understand.

During J1808’s recent round of activity, NICER detected another, much fainter X-ray burst that displayed none of the key features observed in the Aug. 20 event.

In addition to detecting the expansion of different layers, NICER’s observations of the blast reveal X-rays reflecting off of the accretion disk and record the flickering of “burst oscillations” — X-ray signals that rise and fall at the pulsar’s spin frequency, but that occur at different surface locations than the hot spots responsible for its normal X-ray pulses.

A paper describing the findings has been published by The Astrophysical Journal Letters and is available online.