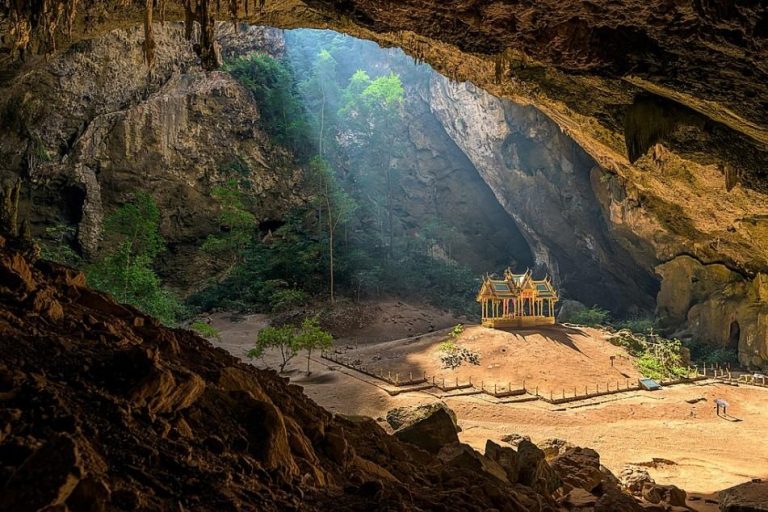 Inside the Khao Sam Roi Yot National Park in Thailand, there is a cave called Phraya Nakhon. Located about 10 miles from the park headquarters, the cave contains a royal pavilion built in 1890 for King Rama V. The park was established in 1966 and later expanded in 1982. It is home to a variety of birds and rare animals like the mainland serow.

The cave has a hole in the ceiling that allows sunlight to reach the center. At the top of the hole is a stone bridge infamous for being responsible for the deaths of several animals. As such, it is also called the “death bridge.” The first thing people usually notice at the cave is the dry waterfall in the first chamber that also contains stalagmites and stalactites.

Phraya Nakhon has two chambers in total. “The main one hosts the highlight of the visit, the small mound on which stands the royal pavilion paying tribute to King Rama V. On his right, on the wall you will see the King’s signature and Rama VII’s signature… Behind the little hill with the pavilion you will find a rock whose shape looks like a crocodile, while the path that leads to the main chamber is called crocodile back path because its bumps makes it look like the back of a crocodile,” according to Thailandee.

Local legends state that the cave was discovered about two centuries back by a local ruler, Nakhon Srithammaraj, who was forced to look for shelter during a storm. However, experts are of the opinion that the cave was found by a nobleman named Nakhon, who lived in the region during the 17th century. In addition to Rama V and Rama VII, the late King Rama IX also visited the cave. However, he did not leave his signature like his predecessors. Today, the pavilion is considered an iconic symbol of the province of Prachuap Khiri Khan.

Khao Sam Roi Yot National Park is located “about 110 miles south-southwest from Bangkok… and about a 45-minute drive south of Hua Hin. From the small village of Bang Pu, you can either take a boat around the cape to the cave, or hike for 30 to 45 minutes,” according to Atlas Obscura. There is a small town near the park called Sam Roi Yot that has a train station. However, it is not an ideal way to get to the park since the station usually doesn’t have taxis waiting to service visitors.

Once at the park, you will have to take a 1,410-foot hike through the forest to reach the cave entrance, which can take up to 30 minutes. Be sure to bring enough drinking water as the hike can be exhausting for some people due to the hot and humid conditions. You may also have to apply some insect repellent depending on the climate.

There is an entrance fee of around 200 Thai Baht [US$6.65] per person for the park. The best time to visit the cave is during the early morning hours, around 10 a.m. to 10:30 a.m. when the sunlight falls on the pavilion, thereby creating an enchanting and ethereal scene. The park usually has very few visitors on weekdays. However, it does attract significant crowds during the weekends.