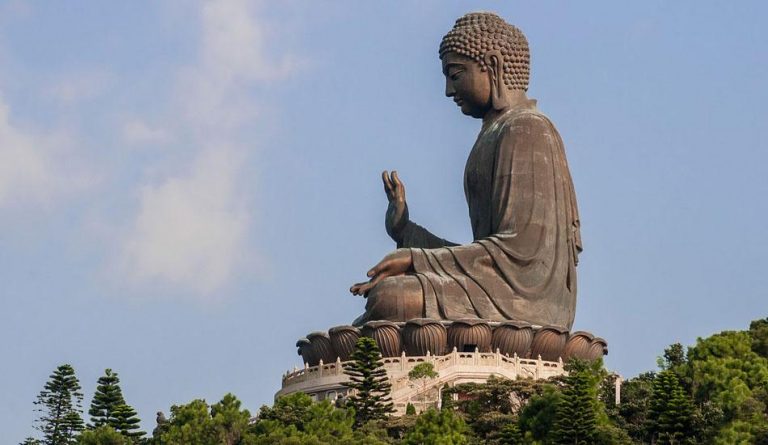 One of the major tourist attractions in Hong Kong is the Tian Tan Buddha located on Lantau Island. (Image: Béria L. Rodríguez via Wikimedia Commons)

One of the major tourist attractions in Hong Kong is the Tian Tan Buddha statue. Located at Ngong Ping on Lantau Island, this giant bronze statue was constructed in the early 1990s and symbolizes the harmonious relationship between nature and man.

During the Eastern Han period (A.D. 25 to A.D. 220), Buddhism arrived in China. With it, the Chinese began to explore fresh spiritual ideas that had an everlasting impact on their culture. In 1979, the Po Lin Monastery was gifted land on which they could build a statue of the Buddha.

The name Tian Tan is inspired by the Altar of Heaven in Beijing, a temple that used to be visited by Chinese emperors for religious ceremonies. Construction of the statue began in 1990 and was completed on December 29, 1993, which is regarded by the Chinese as the day when Buddha attained enlightenment. For its inauguration, Buddhist monks from around the world were invited.

“The statue sits 34 meters high… The facial features were inspired by that of the Buddha Vairocana of the Longmen Caves, while the clothes were modeled after the Buddha Sakyamuni in Cave 360 of the Dunhuang Grottoes,” according to Culture Trip. It weighs over 250 metric tons and was built using 202 bronze pieces. The raised right hand of the Buddha symbolizes the removal of affliction. The Buddha’s left hand rests open on his lap, symbolizing generosity. What makes the Tian Tan Buddha statue different from other renowned statues of the Buddha is that it faces north, unlike others that usually face south.

Beneath the Tian Tan Buddha statue, there are three floors. One of them houses a relic of the Buddha, which apparently contains his cremated remains. Only visitors who buy an offering for the Buddha are allowed to view the relic. In the showroom, there exists a big carved bell that is designed to ring once every seven minutes, 108 times a day. To reach the Tian Tan Buddha statue, visitors have to climb 268 steps. Though the task takes a bit of effort, the view of the grand statue along with the mountains and sea makes it worth it.

The Tian Tan Buddha statue is surrounded by six smaller bronze statues, which are known as “The Offering of the Six Devas.” These statues hold different offerings like flowers, incense, ointment, fruits, a lamp, and music, which represent generosity, patience, meditation, morality, wisdom, and zeal respectively. The Po Lin monastery is located just opposite the statue.

Get to the Tung Chung Town center and you should be able to travel to Tian Tan using the Ngong Ping cable car, bus, or taxi. If you opt for the cable car, you should know that you may have to stand in line for about an hour. Get to the ticket counter before it opens so as to avoid wasting time. People who arrive at Central can take a ferry to Mui Wo and ride a bus to the Tian Tan Buddha statue.

If you are visiting with children, prepare yourself to carry them in case they are not able to climb the 268 steps. After the visit, you can check out the historic Tai O fishing village nearby, which will give a glimpse into how Hong Kong existed prior to being colonized. You can also spend some time hiking around Lantau Island.