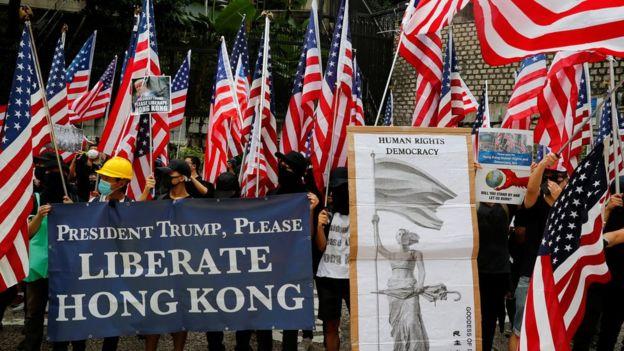 It is bizarre to see some anti-government protesters in Hong Kong waving American flags and holding up a placard with a picture of Trump. (Image: Screenshot via YouTube)

In a bid to protect Hong Kong’s democracy, the U.S. Congress has passed the Hong Kong Human Rights and Democracy Act of 2019.  The U.S. House of Representatives approved the measure that aims to protect human rights in Hong Kong by a 417-1 margin amid efforts to crack down on months of anti-government protests. The House passed a second bill to bar the export of certain munitions to Hong Kong police by the same margin. The U.S. Senate unanimously approved both pieces of legislation and the final bill was sent to President Trump’s desk for his signature.

The Hong Kong Human Rights and Democracy Act of 2019

The Hong Kong Human Rights and Democracy Act of 2019 will demand greater scrutiny of the city’s special status. The bill also lays out a process for the president to impose sanctions and travel restrictions on those who are found to be knowingly responsible for threatened or carried out arbitrary detention, torture, forced confessions of any individual in Hong Kong, or other violations of internationally recognized human rights in the former British colony.

Under the bill, the president can also impose sanctions on those who violate the 1997 Sino-British Joint Declaration — the agreement under which Britain handed Hong Kong back to China, and which sets the terms of the city’s autonomy.

The vote was met with triumph in congress, but with anger and condemnation from China. In a statement, the Chinese Ministry of Foreign Affairs said the bill “neglects facts and truth, applies double standards, and blatantly interferes in Hong Kong affairs and China’s other internal affairs.” It also claimed that the issue at hand was not about democracy, but about stopping the “chaos” wreaked by “violent criminals.”

Trump said he supports pro-democracy demonstrators in Hong Kong, but he stopped short of saying he would sign legislation requiring sanctions against China for any crackdown on Hong Kong protesters.

In an interview on the Fox News program, Fox and Friends, Trump said:

“We have to stand with Hong Kong, but I’m also standing with President Xi, he’s a friend of mine. The bottom line is we have a very good chance to make a deal.”

“I stand with Hong Kong. I stand with freedom, but we are also in the process of making the largest trade deal in history. And if we could do that, that would be great.”

Still, Congress may override the president if he vetoes the bipartisan legislation, said Republican Senator John Barrasso of Wyoming:

“There’s overwhelming support for this — as you know, 100 [votes] in the United States Senate. I would imagine there would be an override of this. I would encourage the president to sign it.”

At the time of this writing, White House lawyers are reviewing the bill; however, President Trump still has not publicly signaled if he will sign the legislation or not.