From Tiananmen to Berlin 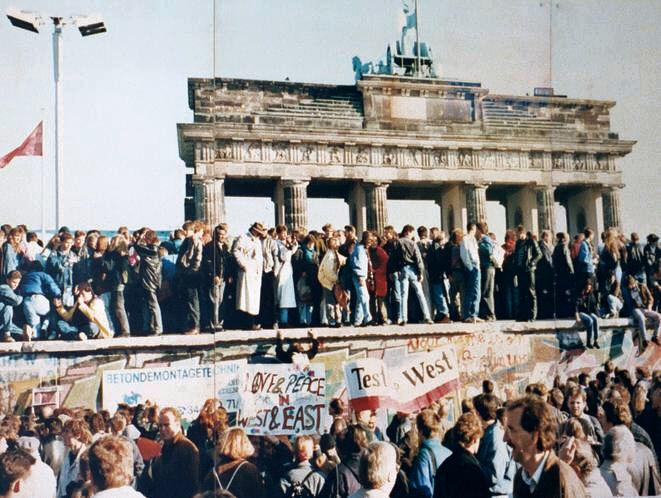 In the early morning of June 4, 1989, the bloody suppression of the student-led demonstration by the Chinese Communist Party (CCP) in Tiananmen Square shocked the world. This was severely condemned by the Western world and the media. Four months later the Berlin Wall fell.

On October 7, 1989, at the National Day celebrations of the 40th anniversary of East Germany, Soviet Union President Mikhail S. Gorbachev urged Erich Honecker, the General Secretary of the Socialist Unity Party of Germany, to launch liberal reforms. However, Honecker refused.

The Berlin Wall fell in October 1989

On October 9, nearly 70,000 people held an unprecedented rally in Leipzig demanding a freed and elected democratic government and this quickly spread to other East German cities. On October 18, Honecker was forced to resign. November 9 saw the pivotal event in world history that marked the fall of the Berlin Wall, which was the symbol of the “Iron Curtain” that cut off West Germany from surrounding East Germany. In December 1989, the world witnessed the end of communist rule in East Germany.

Following German reunification, Honecker sought asylum in Moscow, but was extradited back to Germany to stand trial for treason. Although the proceedings were abandoned due to his illness, he could not elute himself of the shame and charges.

On June 4, 2019, in a seminar, two former East German “dissidents” talked about the “June 4th” experience. According to the Voice of Germany, Stephan Hilsberg and Andreas Schönfelder respectively said that after the bloodshed in Beijing, many people were worried that the government would adopt the “Beijing model” to suppress the civil protests in East Germany. They analyzed that the East German government did not use force mainly because Gorbachev repeatedly stressed that the Soviet Union would not intervene. Following the June 4th incident, the CCP was shunned internationally, which caused the East German government to be wary.

Dr. Klaus Müehlhahn, the Vice President of the Free University of Berlin, who also attended the seminar, believed that the Chinese students who were fighting for democracy inspired East Germany and Eastern Europe: “If the Chinese young people had not protested, the Eastern Europeans may not have had the courage.”

In 1989, the Beijing protesters were crushed by tanks at Tiananmen Square, gunned down by bullets, and the summer was frozen in terror. In autumn, the East German people peacefully pulled down the high walls of communist totalitarianism.

The president of the University of Leipzig once said: “Unbelievable, no one is killed, no one is hurt, no glasses are broken, it’s just like an angel passing by and throwing flowers. This is the most memorable moment in my life.” A German writer who witnessed the scene on the Berlin Wall wrote: “It is like the coming of the Holy Spirit, just like an angel opening and spreading their wings.”

Since the separation of West Germany from East Germany, the people of the East have longed for the capitalism of the West, where not only democracy and freedom prevail, but also to experience the luxuries and plentiful consumer goods. The best evidence is that nearly 3 million people fled from East Germany to West Germany. The East German people even regarded bananas sent by relatives in West Germany as treasures.

On October 9, 1989, 70,000 people in Leipzig took to the streets, which had not happened for decades. At that time, news that the government would severely suppress protesters was circulated everywhere. Although people were scared, they still stepped out to protest for their rights.

Three members of the Ewald family were also in the demonstration and they saw the heavily armed police stand by in trucks. One of them said:

“We shouted ‘We are the people!’ I am encouraged by such spectacular scenes. There are tears in our eyes; we could not tell whether these are tears of joy or fear. We don’t know what lies ahead. We only know one thing; we don’t want to live like before. We are not bothered about what is ahead of us!”

The demonstration was a spark that triggered a wave of protests around the country. On November 4, 500,000 people gathered at Alexanderplatz in Berlin demanding freedom of speech and the press. The determination and will of the people of East Germany who pulled down the Berlin Wall changed their own destiny.

In the face of the resistance from the people, leaders of the East German Communist Party did not issue an order to open fire on the protesters; whether it was out of fear, trade-offs, or for whatever reasons, this decision finally led to peace and unity. The dramatic changes were astonishing and amazing. In those days, Gorbachev chose to follow the trend that not only opened the way for the democratic process in Eastern Europe and the Soviet Union, but also secured a stable position for himself.

On November 28, 1989, the Chancellor of West Germany, Helmut Kohl, oversaw the German reunification, which included immediate humanitarian and economic assistance to East Germany; family reunification restrictions were relaxed; and the provision of employment, free vocational training, and free housing to refugees from East Germany. These generous and humane policies explain why millions of East Germans fled to West Germany.

Everyone has choices and the military is no exception. The moral allusion to “lifting the muzzle up by one centimeter” stemmed from the shooting at the Berlin Wall. The actual version of the story is as follows:

On February 6, 1989, East German youth Chris Gueffroy was killed by a soldier named Ingo Heinrich when he was attempting to flee from the East by climbing over the Berlin Wall. Henrich was sentenced to three and a half years in prison in January 1992. He said in court: “I was following the law and directive of the German Democratic Republic.” Judge Theodor Seidel said in a sentence: “Not all legal things are right.”

The judge also said that the soldier who opened fire was in violation of basic human rights. Conscience and command are more serious matters, and the human court cannot ignore the supreme existence of morality.

Today, the world is facing a challenge from the CCP. Mainland China and its people are full of grievances and Hong Kong is at the forefront of the struggle. The CCP as the “second-largest economy” instills fear and tries to implement a new model of totalitarian control. More people are calling for freedom and fighting for freedom. The story of the Berlin Wall provides an important reference and further predictions are equally worth revisiting.

A barrier that blocks freedom is spawned and destroyed. Different decisions and choices have created the tragedy and joy of history. Among them, there are many profound lessons, and the revelation of hope is flashing.