From the Silent Era: Best of Buster Keaton’s Stunts 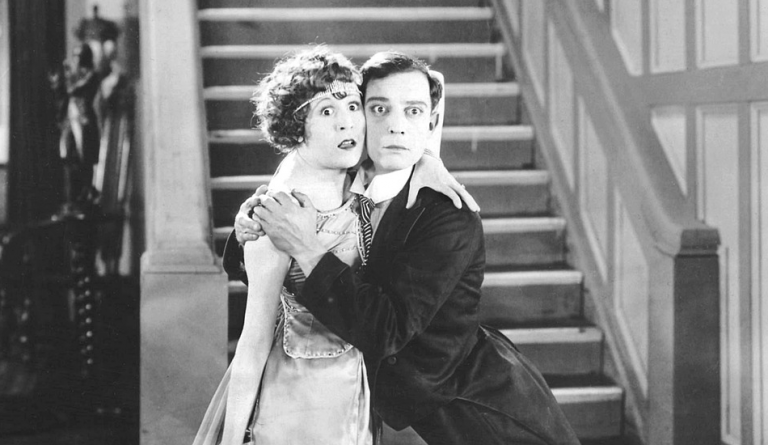 In the history of American cinema, the name Buster Keaton stands tall as one of the greatest stunt performers of all time. (Image: via pixabay / CC0 1.0)

In the history of American cinema, the name Buster Keaton stands tall as one of the greatest stunt performers of all time. While today’s Hollywood stunts are done with numerous safety precautions, Keaton’s work during the silent era relied largely on his guts. This is why some of his stunts, despite being several decades old, still continue to generate awe.

The 1924 move Sherlock Jr. saw Keaton perform two popular stunts. One involved Keaton holding on to an upright roadblock gate that swings down, with him jumping on to an oncoming car at the right moment. In the second feat, Keaton is seen hopping atop the cars of a running train, eventually clutching on to a water spout.

His weight triggers the spout that releases the water and knocks Keaton down onto the tracks. “Despite being rendered unconscious and experiencing severe headaches, Keaton soldiered on. In fact, he soldiered on for another decade or so before a trip to the doctors brought a diagnosis many years in the making. An x-ray revealed the fall had broken his neck,” according to The Vintage News.

In 1926, Keaton released the movie The General featuring an epic locomotive chase. In one scene, Keaton can be seen standing on the train’s cow plow, smartly using a piece of wood to deflect another piece of wood that was lying in front of the tracks. Though the movie is often regarded as Keaton’s greatest, it, unfortunately, failed to click with the audience at the time of release.

Perhaps Keaton’s most memorable daredevil moment is in the 1928 movie Steamboat Bill Jr. “The celebrated moment in ‘Steamboat Bill Jr.’ when the facade of a house drops to the ground with a two-tonne thwack, leaving Keaton serene amid the debris, relied on precise mathematics and nerves of steel. Keaton’s position on the ground had to line up exactly with an open window in the top of the house; thankfully for him, it did,” according to The Guardian.

Buster Keaton was born Joseph Frank Keaton. He is said to have started using the name Buster thanks to famous illusionist Harry Houdini, who was a former partner of his father. As a child, Keaton once fell down the stairs. However, he immediately sprang back on his feet as if nothing happened. Houdini, who saw the incident, was surprised and apparently said: “That was a real Buster.” Keaton is believed to have taken his name “Buster” from this incident. The story has never been confirmed to be true.

Despite starring in many movies, Keaton never actually prepared a script for the films. When shooting a movie, Keaton would simply get an overall idea of the plot, design the stunts, and would start shooting. He wouldn’t even rehearse! “Two or three writers and I would start with an idea and then we’d work out a strong finish and let the middle take care of itself, as it always does… Sometimes, we’d work out a gag in advance; other times, it would work itself out as we went along,” Keaton once said (Ranker).

After 1928, marital and career issues turned Keaton into a heavy drinker. After his alcoholism turned bad, Keaton was institutionalized and even restrained in a straightjacket. However, Keaton is said to have escaped the institution thanks to a few tricks he learned from Houdini.