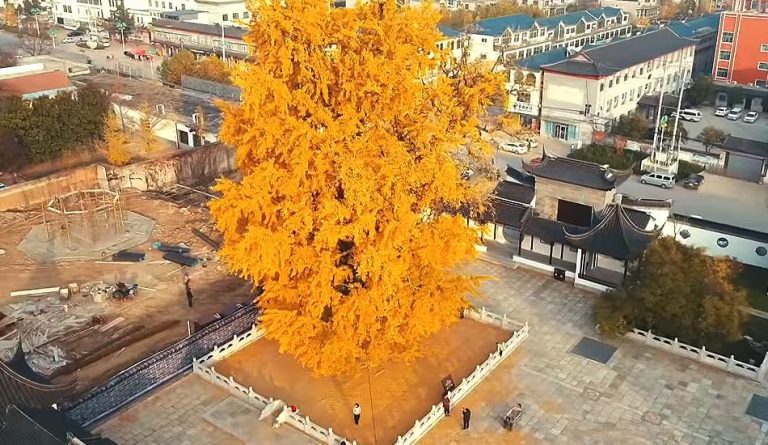 Within the walls of the Guanyin Buddhist Temple in the Zhongnan Mountains, there is a large ginkgo tree believed to be 1,400 years old. (Image: Screenshot / YouTube)

Within the walls of the Guanyin Buddhist Temple in the Zhongnan Mountains, there is a large ginkgo tree believed to be 1,400 years old. Every autumn, the green leaves turn golden in color. And when the tree sheds its leaves, the ground turns into a “golden carpet” that makes for a stunning sight to behold. The tree has attracted thousands of visitors during its current “leaf shedding” period.

The shedding of the leaves is a much-celebrated event by the people around the temple. Authorities allow about 3,000 visitors onto the grounds every day. This year, around 60,000 people are believed to have witnessed the spectacle before the premises were closed on November 20.

According to legend, the tree was planted by the second imperial ruler of the Tang Dynasty, Emperor Li Shimin, between A.D. 629 and A.D. 649. The ginkgo tree is often called a fossil tree since it is the last survivor of an ancient group of trees that existed even before the dinosaurs started walking on Earth. Dinosaurs appeared about 240 million years ago, while ginkgo trees are estimated to have originated 270 million ago.

The ginkgo was a very widespread tree in ancient times. However, its range started shrinking until it was only left in a small region in central China. “Scientists believe the tree may have survived climate shifts in isolated mountain valleys in today’s Sichuan Province, while other ginkgo subspecies, notably in Zhejiang Province, may have been cultivated by monks living in the region nearly 1,000 years ago. From these remnant populations, the tree spread throughout East Asia as a popular addition to gardens,” according to The Beijinger.

Traditional Chinese medicine lists several healing properties of the ginkgo. By the end of the 20th century, extracts of the ginkgo tree were believed to have memory-boosting properties. “Ginkgos are grown as hedges in China to supply the leaves for western herbal medicine. The leaves contain ginkgolides, which are used to improve blood circulation to the brain and to relieve Alzheimer’s, tinnitus, and Reynaud’s Syndrome. It is usually Europe’s number one selling herbal medication,” according to Eden Project.

As ginkgo trees live for thousands of years, they have been seen as a symbol of longevity in China. After the attack on Hiroshima, ginkgos were the first to start growing again. Six of these trees are still thriving today despite being exposed to a nuclear blast! Though they are widely used for ornamentation, only the male trees are typically used by urban planners for landscaping.

“Female trees produce a foul-smelling seed (or fruit). The fruit stinks like rancid butter, which is designed to attract carnivorous animals — possibly dinosaurs, long ago! Male trees merely produce pollen, so they’re far more appealing to have around. Choosing male-only trees can cause some biodiversity issues in cityscapes. Without female trees, ginkgos never have the chance to really settle into a new area,” according to Garden And Happy.

A ginkgo tree can grow up to 150 feet in height. They are also very popular in Bonsai, where the trees are only allowed to grow a foot tall. The trees tend to repel insects because of a special toxin they secrete. Due to this, the tree does not attract too many birds.