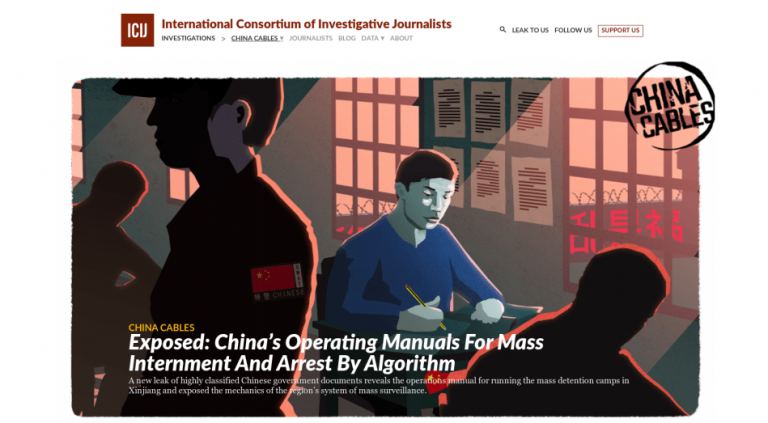 The International Consortium of Investigative Journalists (ICIJ) published a series of leaked Chinese documents revealing the systematic oppression being used to wipe out Uyghurs‘ cultural identity. (Image: via ICIJ )

The International Consortium of Investigative Journalists (ICIJ) recently published a series of leaked Chinese documents that reveal the horrifying extent to which Beijing is culturally cleansing the Uyghur minority in Xinjiang. Dubbed the “China Cables,” the documents have been dismissed by China as fake.

One of the documents is a 9-page memo from 2017 apparently issued by Zhu Hailun, the Chinese Communist Party’s (CCP) deputy secretary at that time. Zhu was in charge of the security of Xinjiang and had apparently sent the memos to those who ran the internment camps where the Uyghurs were being detained.

“The students should have a fixed bed position, fixed queue position, fixed classroom seat, and fixed station during skills work, and it is strictly forbidden for this to be changed… Implement behavioural norms and discipline requirements for getting up, roll call, washing, going to the toilet, organising and housekeeping, eating, studying, sleeping, closing the door and so forth,” the document states (BBC).

The memo instructs officials to ensure that Mandarin studies are a top priority among the detainees. It requires complete surveillance coverage of classrooms and dormitories. The Uyghurs are to be encouraged to feel “repentance” so that they realize the “dangerous” nature of their past activity. If any of the detainees show signs of resistance to the brainwashing, the officials are responsible for ensuring that “education transformation” is achieved.

Prisoners in the camp are subject to a points system. If they accept the communist ideology, live with discipline in the camp, study and train hard as instructed, they earn points. Those who earn the prescribed number of points are allowed to re-establish contact with their families once released from the camp. Inmates with lower points are punished.

The scale of the crackdown operations against Uyghurs is huge. One memo describes 15,000 people being sent to camps all over Xinjiang in just one week. Another document described how the online surveillance system flagged almost 1.8 million people just for using a video-sharing app on their smartphones. Beijing then ordered an investigation into 40,000 of these flagged people, advising officials to send them for “concentrated training” in case they remain under suspicion.

Even Uyghurs living abroad are not spared from persecution by Beijing. The documents reveal instructions to keep track of Uyghurs who have settled abroad and arrest those who possess foreign citizenship. This points to a strong possibility that Chinese embassies across the world might be involved in monitoring and suppressing Uyghurs who live outside China.

The leaked documents have triggered strong reactions internationally. Human rights organizations have pointed to the documents as proof that the international community needs to act strictly against Beijing for its inhumane treatment of minorities. U.S. Secretary of State Mike Pompeo was also very critical of China and asked Beijing to release the detained Uyghurs.

“These reports are consistent with an overwhelming and growing body of evidence that the Chinese Communist Party is committing human rights violations and abuses against individuals in mass detention,” he said in a statement (Radio Free Asia).

The Chinese side has squarely denied the validity of the documents. They accused Western powers of trying to smear China in an attempt to interfere in the country’s internal matters as well as block the ongoing “counter-terrorism” activities in Xinjiang. Despite these arguments, China still continues to deny independent foreign researchers the access needed to evaluate the true situation in the Xinjiang region.