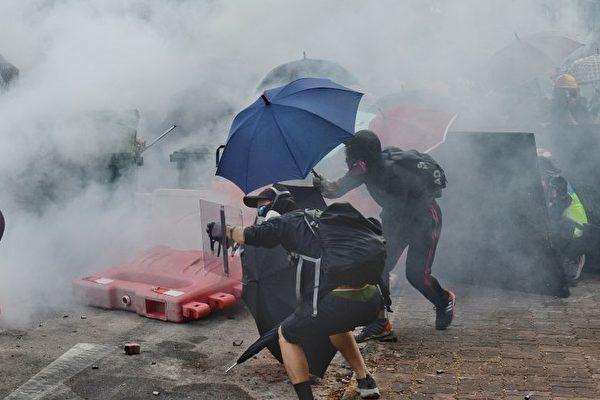 Over the past six months, the people of Hong Kong have suffered heavy casualties, with some of the worst taking place during the clashes between police and students on a university campus on November 12.  This situation is comparable to that of the June 4, 1989 brutality in Beijing’s Tiananmen Square. It has made the world see the tyranny of the Chinese Communist Party (CCP) and the Hong Kong government, as well as the courage of the people to defend their freedom and human rights. To the outside world, there are some similarities between the resistance in Hong Kong and that in Beijing, but with different results. There are also some differences worth noting.

1. Protesters recognize the CCP for what it is

The people in Hong Kong have seen through Beijing and will not yield to its pressure. In the past, the students at Tiananmen Square regarded the CCP as their government, and they did not live in a free society. They appealed for freedom and democracy, but they did not expect their government to issue an order to shoot. Even after Beijing imposed martial law, there were still people who held out hope for change, but this was not to be. With the current situation, the students and people of Hong Kong already know what freedom and democracy are. They would rather give up their lives than lose their rights.

When the students were holed up at the university campus during the siege by Hong Kong police on November 12, the public even sent supplies to the students overnight. The people are not angry at the protesters, but rather are angry at the government for how they have handled the situation, and for attempting to destroy democracy in Hong Kong.

Due to today’s very advanced communication network, it is no longer easy for Beijing to cover up what it does. At the time of the Tiananmen Square massacre, communication in Beijing was not well-developed, and this information was not easily obtained or shared. As a result, the ability to organize the protests and disseminate any information was limited. Beijing also exerted control over what both the people of China, as well as the outside world, knew. Had these protests occurred today, the outcome may have been different.

Hong Kong is a society with a highly-developed information system and a free press. In the present-day media era, all kinds of news stories and videos have been distributed in real-time, and many of these stories have revealed the details of what’s taking place. For instance, all three attacks on November 14 were captured in photographs and videos by the people of Hong Kong.

In the Tiananmen Square Massacre, Beijing quickly mobilized more armed troops, ordering them to brutally slaughter students and civilians. This has been referred to as an “incident” by China, as a means of downplaying the show of utter control and brutality Beijing displayed.

Today, Beijing is more cautious with how it’s handling things in Hong Kong. They dare not send troops; mind you, not that Beijing does not want to, but rather, it knows that there is a spotlight on what’s happening. It has instead been more subversive in its tactics this time and is attempting to manipulate the situation in Hong Kong in order to justify a crackdown, even going so far as to pose as unruly or violent protesters, many believe.

There are several indications that Beijing has sent a large number of public security personnel into Hong Kong. For one, terminology and phrasing overheard among the police recently are the same as that used in mainland China, and not that of the Hong Kong police. In addition, the way in which the protests are now being squashed resembles the way a totalitarian regime would manage things, rather than the way a free and democratic police force would manage things. This increasing show of force and brutality is very telling.

There has also been a recent surge in the number of suicides in Hong Kong. Many signs point to these deaths being staged to look like suicides, when, in fact, they are believed to be cases of murder at the hands of disguised mainland security personnel.

4. International sanctions are a real concern

After the June 4  massacre of students at Tiananmen Square, the international community imposed sanctions on China, and even today, condemnation of the government’s actions continues. International sanctions were issued one after another, and as a result, Beijing has become warier and has hesitated to use the same brutality in Hong Kong today.

The United States Senate recently accelerated the procedure to pass the Hong Kong Human Rights and Democracy Act of 2019, which would require the U.S. government to impose sanctions on Chinese officials responsible for human rights abuses in Hong Kong. In addition, it would require the State Department to do an annual review of the autonomous status granted to Hong Kong as a separate entity from China. The bill first passed the Senate, and then went on to pass the House on November 20. Senator Marco Rubio, who co-sponsored the bill, immediately took to Twitter saying: “…the United States Congress has made it clear that America is going to stand with Hong Kong.”

On November 27, in a show of solidarity, President Trump signed the bill into law. A second bill, prohibiting the export of any equipment that could be used by Hong Kong police to control protesters, was also signed into law and the people of Hong Kong took to the streets in a show of gratitude.

Chiang Wan-an, Kuomintang’s legislator and Mr. Chiang Kai-shek’s great-grandson, posted on Facebook several days ago that it was important to pay tribute to Hong Kong students and the young people who defend freedom and democracy. He also called upon Taiwan’s President, Tsai Ing-Wen, to provide any necessary humanitarian relief to the people of Hong Kong.

Nearly 2,400 international scholars and administrators from 38 countries around the world — including Cambridge, Oxford, Harvard, Columbia, and other world-renowned universities — have issued statements urging Hong Kong police not to attack the university campus. They viewed this as a flagrant violation of academic and intellectual freedom, which threatens the students’ safety, and said if this is not stopped, they will end their cooperation with the University of Hong Kong.

The British daily newspaper The Guardian reported that UK ministers have planned to implement new sanction laws against individuals in Hong Kong found guilty of human rights abuses in the suppression of street protests. Chris Whitehouse, an aide to the All-Party Parliamentary Group on Hong Kong, said that Chief Executive Carrie Lam, as well as senior Hong Kong police officers, “were obvious targets for the potential use of the legal sanctions.”

While Beijing continues to say that this is its own affair, it is not holding up its end of the deal with Hong Kong, a deal that allows the city to maintain a free and democratic form of rule under the one country, two systems agreement.  In response, United States Republican Senator Marco Rubio recently tweeted: “After my #HongKong bill passed #China warns us to ‘rein in the horse at the edge of the precipice’ & stop interfering in an internal affair But its Beijing which is at the ‘edge of the precipice’ & special treatment for Hong Kong is a U.S. internal affair.”