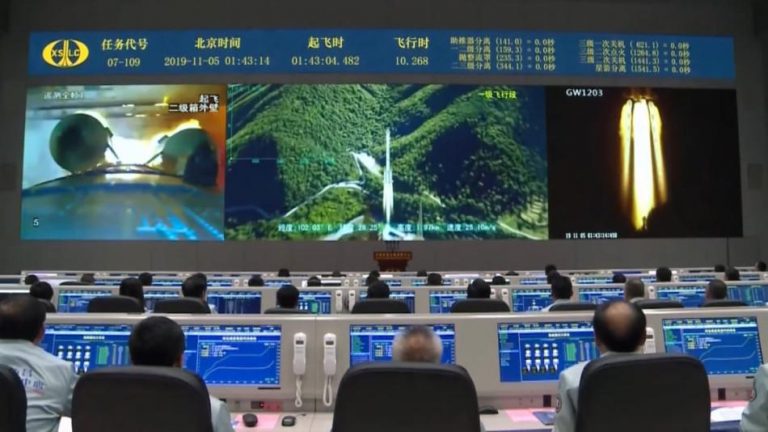 China recently launched two satellites into space for their GNS (global navigation satellite) system that is being built as a rival to the U.S.-led GPS system. (Image: Screenshot / YouTube)

China recently launched two navigation satellites into space. While the mission was successful, it ended up sending booster segments crashing back to Earth. The two satellites are the 50th and 51st components of the GNS (global navigation satellite) system named the “BeiDou constellation” that China aims to complete by next year.

The satellites were launched from the Xichang Satellite Launching Center in Sichuan Province. After the Long March 3B rocket delivered the satellites to orbit, the spent rocket fell into a settlement located downstream of the launch site. Images from the crash site circulated on social media and showed several damaged buildings, with some of them on fire.

According to Andrew Jones, a space journalist who specializes in China’s space program, China built its first three launch sites deep inland. As a result, the boosters end up dropping parts over land rather than the sea. And since China’s space launches have been rising over the past years, incidents of impacts have also increased. In contrast, U.S. launch pads are often located along coastlines, due to which most of the rockets fall back into the ocean.

Authorities issued notices to the settlements, warning them of a potential rocket crash. They were advised to take shelter prior to the launch. “At that time, please cut off your power at home 20 minutes prior and hide in a safe area. If you see any flying objects falling from the sky, please adjust your location quickly to avoid any harm. If you discover any debris, please don’t get close or pick them up because they could be harmful to human bodies due to the chemicals,” the notice stated (CNBC).

Back in 1996, a Long March 3B rocket moved off course after launch and ended up crashing into a village nearby. The incident killed six people and injured 57. China is apparently testing a technology called “grid fins” that is expected to help guide rockets falling back to Earth into safer areas. In the U.S., SpaceX already uses the tech to steer its rockets back toward the launching pads.

At the recent CyberSat19 conference, U.S. Defense Intelligence Agency Director Lt. Gen. Robert Ashley warned that China is playing the game of “Go” in a bid to become the dominant space power. “Go” is a traditional Chinese board game that was invented thousands of years ago. The objective of a player is to place the stones he possesses at locations on the board in a way that they capture the largest territory.

“Unlike chess, you’re not going after a king or a queen and there’s not a final move where you’re declared the victor. You add up points on the board based on the amount of territory or space that you control. Think of that in the context of aerial denial and aerial defense… I started seeing literally what is a game of Go being played on the planet… That game is also being played in space,” he said in a statement (C4ISRNET).

Beijing is expanding its territorial influence in such a way that it will be in a position to counter America’s space capabilities. This is in line with China’s military doctrine that insists that such space capabilities will be the first target of attack in the event of a conflict. Ashley also pointed out that China will boast the biggest GPS-like system in space by 2020 and that the country conducted more space operations than any other nation in the world in 2018.