Chinese YouTuber Detained in Thailand Fears Being Sent Back to China 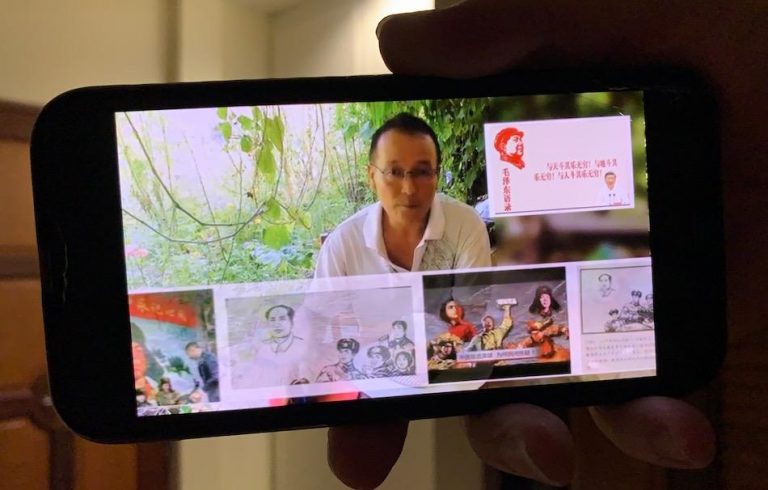 One of Leng Tao’s videos from his YouTube channel plays on a smartphone. (Image: Nspirement)

A Chinese asylum seeker and YouTuber currently held in a Thai immigration detention center is afraid he’ll be deported back to China where he could once again be tortured for his faith.

Leng Tao, 64, was arrested by Thai police on November 4 allegedly over his immigration status and then ordered by a local court to leave the country.

Leng, a Falun Gong practitioner who suffered persecution in China, is currently being held in an immigration detention center in Bangkok awaiting to learn his fate, but he’s hoping to be resettled in another country.

In a letter seen by Nspirement, Leng stated that during his detention he has been questioned by a Thai police official and a UN representative about his YouTube channel Instant Review.

His channel has nearly 30,000 subscribers and Mandarin-language videos are uploaded on it on a regular basis. One video on the channel about former Chinese Communist Party (CCP) leader Jiang Zemin has had over a million views.

“The channel mainly exposes the CCP’s crimes and clarifies the truth about Falun Gong, also including current news and interpretation,” Leng said in the letter written to the U.S. Congress and President Donald Trump to gain attention to his predicament.

Leng said the Thai officer questioning him about his YouTube channel refused to identify himself and after questioning Leng he “forcibly” took the Chinese man’s iPhone, which was an important tool in his video productions.

A source within the detention center allegedly told Leng where the phone was taken to.

“The people in IDC (immigration detention center) who are familiar with these operations said that my mobile phone was taken to the Chinese Embassy,” he wrote.

Leng stated that he also gave details about his channel to a visiting official from the UN Refugee Agency.

“I also told him that another admin was authorized after I was arrested, so the channel was still running,” he wrote.

Imprisoned in China for his faith

Before fleeing to Thailand, Leng was a prisoner of conscience who spent 10 years in Chinese prisons, according to an article published on the Falun Gong website Minghui in October 2019. The article described Leng’s prison experiences, which included being tortured and force-fed unknown drugs that badly damaged his health at the time.

Leng fled his home province of Sichuan for Thailand in 2014 and two years later was granted refugee status through the UN Refugee Agency in Bangkok.

But refugees that overstay their visas or enter Thailand without proper documentation are considered illegal immigrants under Thai law, according to U.S.-based refugee rights group Asylum Access.

Thailand is not a signatory of the 1951 Refugee Convention and does not recognize the rights of refugees.

Prior to his arrest, Leng had hoped — like other refugees — to be resettled to another country through the UN. If that does not happen, he’s now fearful that he’ll be deported to China where he faces the risk of again being imprisoned and tortured, a source knowledgeable of Leng’s case told Nspirement.

Leng also fears another option is that he will be locked away in the Bangkok detention center for years. Leng’s letter gave further details about a small number of other Chinese Falun Gong practitioners in a similar situation in the detention center.

The source told Nspirement that there are currently more than 100 Chinese asylum seekers who fled China to avoid being persecuted for practicing Falun Gong who live a precarious life in Bangkok while waiting for the chance of resettlement. Many of them have been stranded in Thailand for more than five years.

Falun Gong, also known as Falun Dafa, is a spiritual discipline based on meditation and slow-moving exercises, with practitioners following three main principles: Truthfulness, Compassion, Tolerance. It began in northern China during the early 1990s. Easy and free to learn, it quickly spread through China and beyond its borders.

Due to the practice’s popularity, the communist state in China began to persecute Falun Gong practitioners in 1999. The persecution has been brutal, with the most notable example being the reports about the mass killings of practitioners and the harvesting of their organs.

Watch this award-winning short film by Swoop Films about the persecution of Falun Gong: