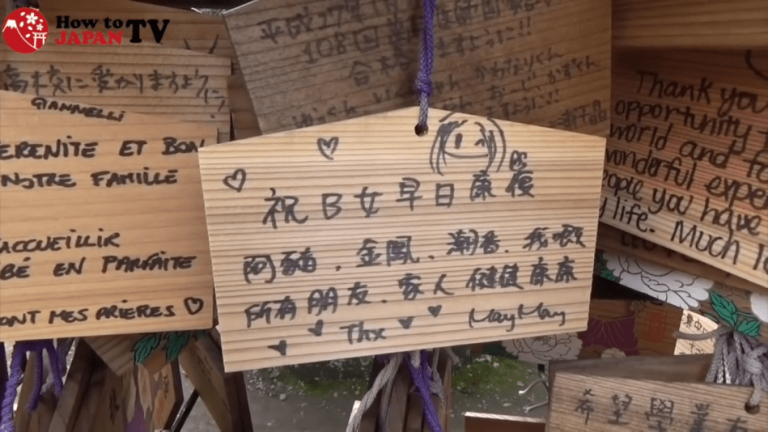 People write down their wishes on small wooden boards to leave at shrines in Japan, but boards with pro-Hong Kong messages have recently been broken or defaced. (Image: Screenshot via YouTube)

In many Shinto and Buddhist shrines, you’ll find racks of emas — small wooden boards that are decorated with beautiful illustrations. When people visit these shrines, they write down their wishes on them, hoping that the gods will fulfill their desires. Of late, several pro-Hong Kong people had hung emas on various shrines. But many of them are being defaced by pro-Chinese agents, showing how rabid the Communist Party’s supporters are no matter where they are in the world.

“Ema on which the original purchasers wrote messages such as ‘Hang in there, people of Hong Kong’ and ‘Liberate Hong Kong, revolution of our time,’ a rallying cry for protesters, have had their messages crossed out or written over with ‘One China.’ In extreme cases, the ema themselves have been found snapped into pieces,” according to Japan Today. The vandalism is believed to be the work of Chinese tourists.

Officials at the Hokoku Shrine in Osaka were first taken aback when they saw the emas scribbled over with Chinese characters. They couldn’t understand what the message was. Only when a woman visiting from Hong Kong read out the messages did the shrine authorities realize that their holy place was becoming a center of a political fight. Other shrines located in Kyoto, Nara, and Kagawa prefecture have all reported similar incidents.

“We have discovered one ema that was completely broken and about five or six times so far we have found that tablets with a message crossed out and other comments added… We picked up the pieces of the ema that was broken but we decided to leave the ones that had been vandalised on the racks… We think this is not a good thing to happen but we do not want to get involved in the arguments,” Rika Tabuchi, an official of Hokoku Shrine, said to South China Morning Post.

Police have yet to arrest anyone for vandalizing the emas. At many shrines, authorities have placed signs in Japanese, English, and Chinese, asking people not to scribble over the emas and respect other people’s opinions. Japanese social media has been filled with posts condemning Chinese tourists and calling their actions disgraceful. Some have suggested placing cameras at the shrines so that people who vandalize emas can be identified and arrested.

The unending protests in Hong Kong are forcing Japanese companies in the region to scale down their operations. A survey conducted by the Hong Kong Japanese Chamber of Commerce and Industry found that many of them were starting to send employees back home. “Of the companies, 1.1 percent have already decided to return their Japanese employees home, and 8.9 percent are considering doing so,” according to Nikkei Asian Review.

A poll conducted by the Japan External Trade Organization in September showed that 4.3 percent of Japanese businesses in Hong Kong had already instructed expatriate families to move to Japan. Of the responding companies, 52.8 percent admitted that their local unit’s performance for the January-August period this year was one of the worst.

Many of the firms were worried that their talented employees could move to other countries to avoid the risk of being in the city when the protests become uncontrollably violent. Nearly 1,400 Japanese companies are estimated to be operating in Hong Kong. The ongoing U.S.-China trade war was also cited as a cause for concern by Japanese firms.