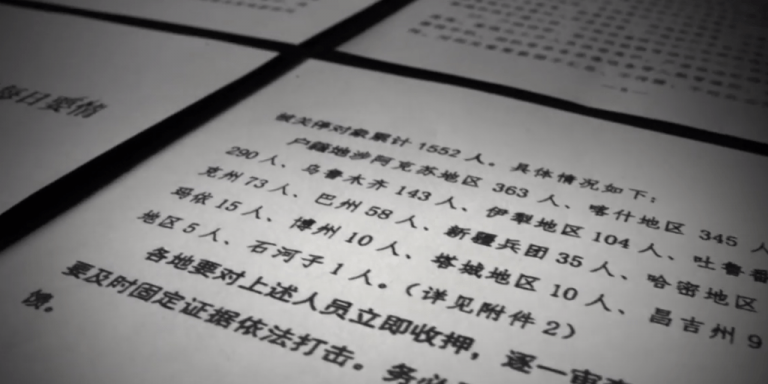 A set of classified Chinese documents dubbed the 'China Cables' has revealed that Beijing keeps track of Uyghurs even when they reside in other countries. (Image: Screenshot via YouTube)

A set of classified Chinese documents released by the International Consortium of Investigative Journalists (ICIJ) has revealed that Beijing keeps track of Uyghurs even when they reside in other countries. Documents dubbed the “China Cables” were sourced by ICIJ from a confidential Chinese source and have been verified by intelligence experts.

The documents reveal that Chinese authorities were keeping track of the activities of over 1,500 Uyghurs who had become foreign nationals. In most cases, the officials approach the foreign Uyghurs and threaten them with bad consequences for their family members back home if they choose not to comply with Beijing’s requirements.

“I think most of the Uighur people who study here or are living here feel the pressure from the Chinese government… [China is] afraid that Uighurs living abroad will tell the facts about what is happening in Xinjiang to the foreign media or foreign peoples,” one Uyghur student living in Canada said to CBC News. Officials have used his parents as leverage to keep him in line.

One document, dated June 2017, is titled “Autonomous Regional Party Committee Command for Cracking Down and Assaulting on the Front Lines” and shows that Beijing was closely tracking about 75 foreign Uyghurs who were in China at that time. The document casts suspicion on these Uyghurs and demands that personal identification verification be held for every one of them.

Another document showed that Chinese embassies across the world were monitoring more than 4,300 people from Xinjiang who had spent some time abroad and had applied for visas. Instructions were given to analyze these people, especially 1,700 of those who were still in China. Uyghurs outside China and suspected of terrorism were to be arrested the moment they stepped foot into the country. Those who were inside the country and suspected of terrorism had to be given “concentrated education.”

In Norway, Uyghurs who attended anti-China protests on October 1, a date that Beijing commemorates as Chinese National Day, were shocked when they received phone calls from Chinese authorities. “I received over a dozen calls. I didn’t know who that was. Later, my father explained it to me the calls were from the Chinese embassy… I fear for my close family members in China. I don’t know anything, if they are even alive or not. It’s so difficult to know,” Tina, a Uyghur who left China 16 years ago, said to Al Jazeera.

The World Bank recently announced that it will be decreasing its development work in Xinjiang after it noticed that a US$50 million loan given for an education project in 2015 may have been used to persecute Uyghurs. Though an investigation into the matter did not unearth the proof necessary to validate the rumors, the organization decided to play it safe and cut funding for now.

The bank will be raising its supervision of the project in Xinjiang and is expected to assign a staff member from Washington for the task. Plus, a senior manager from the bank will make site visits to ensure that the money being invested in the region actually goes for the education of children and nothing else.