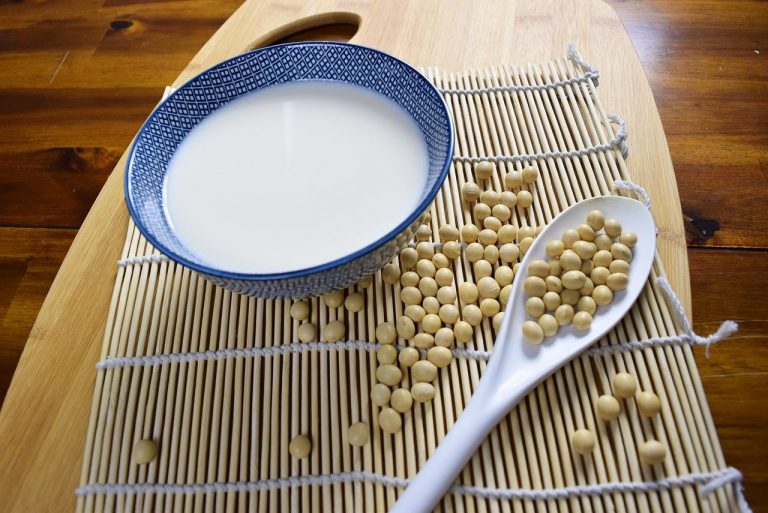 Being a vegetable-based drink, soy milk contains dietary fiber, while cow's milk has none. (Image: via Max Pixel)

Milk consumption has been pushed by advertising and schools over the last decade, being promoted as a source of protein and calcium. However, some experts, such as Dr. Clement of California’s Hippocrates Health Institute, say that nutrient bioavailability of commercial milk is non-existent, especially because it is pasteurized. Thus, milk substitutes might be a better choice.

Cruel farming conditions also mean that a lot of milk contains unhealthy stress hormones, pus, and blood cells, although goat’s and sheep’s milk is considered much better than cow’s in all regards. In fact, many researchers say that most of the calcium that we get from animal products are removed from the body with urine. As milk and other animal products are acidic, neutralizing that acid also apparently means the body leaches out calcium from the bones.

An increasing number of people are choosing to go vegan as a lifestyle choice or due to an intolerance to animal proteins like the casein in milk. Sales of dairy milk dropped 6 percent, with milk substitutes rising 9 percent in 2018, according to Nielson reports. Various nut and grain milks have been appearing on the shelves of supermarkets and health food stores as vegan options. Just be cautious to check the ingredients for added sugar, flavorings, colorings, carrageenan, and chemical-based nutrients, or these milk substitutes might not be better options than milk.

High-quality non-dairy milk should also have at least 7 g of protein per 100ml and less than 140 mg of sodium per cup, according to dietitian Jaclyn London. As for bone health, homemade sesame milk has to be the all-time winner for bioavailable calcium content. And make sure to get at least 20 minutes of sunshine or take a naturally sourced vitamin D3 as well as K2 supplement to help your body absorb that calcium. Chemically produced vitamins and minerals like those usually added to vegan products are not only mal-absorbed, but they can act as toxins in the body.

So go ahead and use these kinds of milk substitutes as a way to enhance your dishes, and back up your nutrient intake with high-quality, naturally sourced supplements if you think you need them.

A glass of soy milk contains 8 g of protein and 80 kcalories. It’s the most commonly found of the milk substitutes and usually inexpensive. Yet, unlike traditionally fermented soy like Japanese natto, which is very healthy, soy milk may not be the best healthwise. Scientific studies have shown that phytoestrogens present in soy can contribute to hormone imbalance and even cancer if taken in large doses. Don’t be afraid of a dash here and there, but drinking a glassful may not be the best.

Pea milk, made from split yellow peas, is the newest arrival of milk substitutes on shelves. A glass of pea milk contains 70 calories and 8 g of protein.  It’s even said to have 50 percent more calcium per cup than milk. Look out for pea milk with added algae oil. The micro-oil of algae is where fish actually get their omega fatty acids. It’s in the original superior and bioavailable form and contains an abundance of essential DHA, which is especially beneficial for brain health and growing children.

Coconut milk can be bought in tins that you can dilute, or as packaged pouring milk that’s made from shredded coconut. It’s rich in iron and lauric acid, but unfortunately high in fat at 4 g per cup. Although health gurus often claim that coconut oil is healthy even when heated, scientific studies have found that it’s also carcinogenic, just as other oils are, according to the Hippocrates Institute. So you may wish to choose other alternatives or limit your intake.

If you have gluten intolerance, you will want to avoid this one. Oat milk is relatively high in fiber, but moderate in protein at 2-4 g per 100 ml. It’s got that creamy flavor of porridge or muesli.

Almond milk is one of the more nutritious of the milk substitutes, especially if you make it yourself. Almonds naturally contain a good amount of calcium, vitamin E, and potassium, but a cup of almond milk only provides about 1 g of protein.

Peanut milk is rich and creamy, and if you love peanut butter, you’ll probably like this one. However, be aware that a large majority of peanuts are contaminated by carcinogenic toxins produced by fungi and can’t be deemed healthy. There’s also the issue of a rise in allergic reactions, as well as pesticides and chemicals being very concentrated in non-organic peanuts. If you’re health-conscious, it’s not your best bet of the milk substitutes.

Flax and chia milk substitutes are a good source of α-Linolenic acid (ALA) needed for major bodily functions and boosts brain and heart health. You need very few ingredients as they thicken up incredibly well.

Cashews contain zinc, copper, magnesium, and iron, which are beneficial to the immune system. Providing 40-50 kcalories per 100 ml, cashew milk is really rich, creamy, and nutty, and often a favorite. Try adding cinnamon or carob powder to cashew milk for a delicious treat. Cashew nuts are one of those ingredients that you should do your best to consume organic. Endosulfan, a highly toxic pesticide that is banned in most countries but still legal in the U.S. and India, is used on non-organic cashew trees. For this reason, homemade fresh milk from organic cashews is best.

Walnut milk is a good choice for getting a boost of omega-3 fatty acids and as brain nourishment. It’s one of the richest vegan kinds of milk substitutes and will also give 3 g of protein per glass. Walnut milk goes well with both tea and coffee.

Rice milk is well tolerated by many and might be a good choice if you are intolerant to nuts, soy, or gluten. It’s one of the most readily available vegan milk in stores. Do be aware, however, that rice milk contains small amounts of arsenic and isn’t considered a health food. Children under 12 should avoid rice milk and opt for other alternatives.

Quinoa is an ancient seed that’s nutritious and gluten-free. It has the added benefit of being a good source of all nine essential amino acids that your body needs to take in from food. 100 ml provides 10-15 g of soluble fiber and is packed with minerals like magnesium, potassium, iron, and zinc. It’s a real healthy pick, especially when made with organic sprouted quinoa.

Sesame milk is jam-packed with nutrients. One cup of sesame seeds contains 1404 mg of calcium — almost 5 times more than a cup of cow’s milk. Making sesame milk makes it easier to consume. As well as calcium, sesame seeds are rich in manganese, phosphorus, magnesium, iron, zinc, vitamin B1, and selenium. They make one of the best of the vegan milks, although the taste is rather bitter. Experiment with a pinch of cinnamon or cardamom, plus one drop of stevia.

Last but not least is hemp. Its milk is a great source of omega fatty acids and high-quality proteins. It’s advised to make your own though, as the oils in hemp are very easily denatured and don’t cope well with being pasteurized.