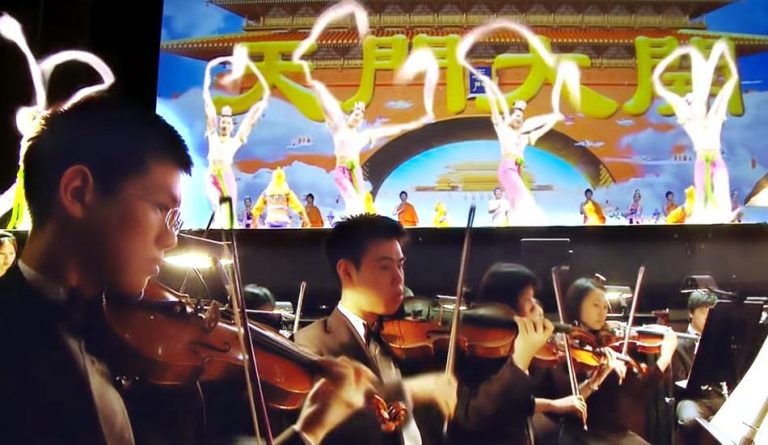 Shen Yun's performances combine a live orchestra with extravagant dance movements that are an absolute delight to watch. (Image: Screenshot via YouTube)

Shen Yun’s arts performances combine a live orchestra with extravagant dance movements that are an absolute delight to watch. The elegant, beautiful costumes worn by the dancers give each Shen Yun performance an otherworldly charm and are one of the reasons people tend to be amazed by them. A lot of work goes into the creation of these outfits.

“Each Shen Yun performance showcases more than 400 Chinese costumes. And what is seen on stage is the result of approximately eighteen thousand nine hundred and seventy-six and a half hours of drawing, cutting, and sewing, more or less… they’re all handmade and often hand-stitched. Not including research and design time, each individual costume takes between 8-15 hours to make, and that’s if the piece passes the dance test. Most will then take another 4-8 hours of nanoscale fitting and adjusting,” according to the official Shen Yun website.

Most Shen Yun costumes are inspired by traditional Han-style clothing from China’s Han Dynasty, as well as the attire of more than 50 ethnic Chinese minorities along with the emblems and ornaments of heavenly beings depicted in traditional mythology and folklore. Han clothing is often characterized by wide sleeves, loose gowns, and open, flat collars that are folded to the right. Instead of buttons, the clothing is held in place using a sash belt. Gowns in the style of the Tang Dynasty are also a favorite of some of the dancers.

Ethnic clothing comes from places like Tibet, where a traditional dress called the “Chuba” is often included in the performances. Costume artists at the Shen Yun center work hard to create hundreds of new outfits every season. The thousands of sequin and crystal decorations on the clothes are strung together individually, bead by bead. Clothes are designed in a way that accentuates the movements of the dancers.

“I was very impressed with the clothing and costumes… I saw here the best example of how fabric, clothing, and sleeves can enhance the movement and tell the story… When the sleeves became a part of the rhythm and a part of the overall design of the set, it was very impressive!” famed designer Norma Kamali said to The Epoch Times.

The beauty of Shen Yun’s music comes from the fact that the orchestra is basically the first in the world to combine Eastern and Western instruments. Chinese instruments like the pipa and erhu tend to handle the melody of the compositions, while the powerful orchestration is provided by Western percussion, strings, and brass. Folk songs from ethnic minorities are included in the performances, with the Mongolian folk dance being a crowd favorite.

“Folk songs all have their own styles, and we respect that and arrange the music according to the styles that they have. You have to know the differences between each group, each nation, each minority… When I started, I knew very little. Then I started to learn. It has to do with the languages, the tones of their language, their religion, their traditions, and customs… You have to know their styles, these different styles. Then you have to present it in a classical way, that’s all,” pipa player and composer Jing Xian said to The Epoch Times.

Ancient Chinese theater used a singing technique that was similar to early European theater. All Shen Yun singers are trained to use classical techniques in their performances. They are unique in their ability to sing Chinese texts using the traditional bel canto technique.