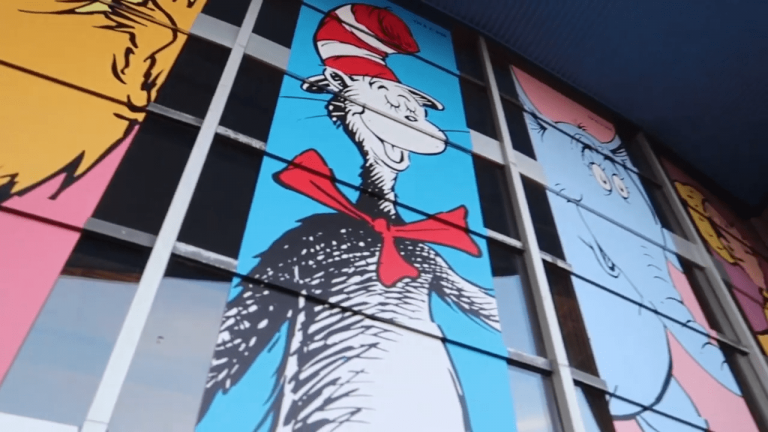 The popular works of Dr. Seuss have been brought to life at the Square One shopping mall in one of Toronto’s suburbs. (Image: Screenshot / YouTube)

If you have been a fan of Dr. Seuss books, you should definitely pay a visit to the Square One shopping mall in Ontario. Inside the mall, spread over 15,000 square feet is a colorful, imaginative place where the popular works of Dr. Seuss have been brought to life. This highly instagrammable place is the production of “Dr. Seuss Enterprises and Kilburn Live” and will be open to visitors until January 5, 2020.

“‘The Dr. Seuss Experience’ brings the extraordinary world of Dr. Seuss to life and we couldn’t be more thrilled to give everyone the opportunity to see and experience their favorite stories and characters as if they jumped right off the pages,” Susan Brandt, President of Dr. Seuss Enterprises, L.P., said in a press release (Today).

While the kids will like playing with their favorite characters, the adults can enjoy taking some cool photos they can put up on social media. The exhibit took almost a year to construct and is the result of the work of artisans and fabricators from all over North America. Anyone who has read Oh! The Places You’ll Go! will definitely like navigating the balloon maze from the book.

In a room inspired by the book There’s a Wocket in my Pocket, children can walk around looking for hidden creatures. At the “Circus McGurkus” exhibit, kids can get on a carousel and go for a ride. In a room based on the book How the Grinch Stole Christmas, visitors are divided into two groups and encouraged to find the most number of gifts hidden in the place.

“The Cat in the Hat experience involves a decent amount of tidying. Visitors are supposed to pick up all the objects on the floor and place them into the two bins. When they’re full, the bins explode, tossing the objects around the room. There’s a puppet operated by a real person. Kids can chat and interact with him as much as they like. The Lorax room is an Instagrammable experience where visitors can swing from Truffula trees and snap photos in the mirrored wall,” according to Toronto Life.

American author Dr. Seuss, whose full name is Theodor Seuss Geisel, wrote over 60 books throughout his career that have sold more than 600 million copies worldwide. Some of them have even been translated into Latin. But before he started writing, Seuss worked in the advertising industry and had successful relationships with brands like General Electric and Ford.

“In 1928, the Standard Oil Company of New Jersey put him on their payroll; Geisel earned [US]$12,000 a year to draw cartoons and posters for Flit, a Standard Oil-owned insecticide brand. During that time, the slogan he devised — “Quick, Henry, the Flit!” — became culturally iconic. Geisel worked with the company until 1941,” according to Mental Floss.

During World War II, Seuss worked as the commander of the Animation Department of the First Motion Picture Unit of the United States Army Air Forces. He was tasked with producing training and propaganda films in support of the American military. Though Seuss became famous for writing children’s books, he thought such books were boring. He tried writing books for adults. However, Seuss never gained much success at such attempts.