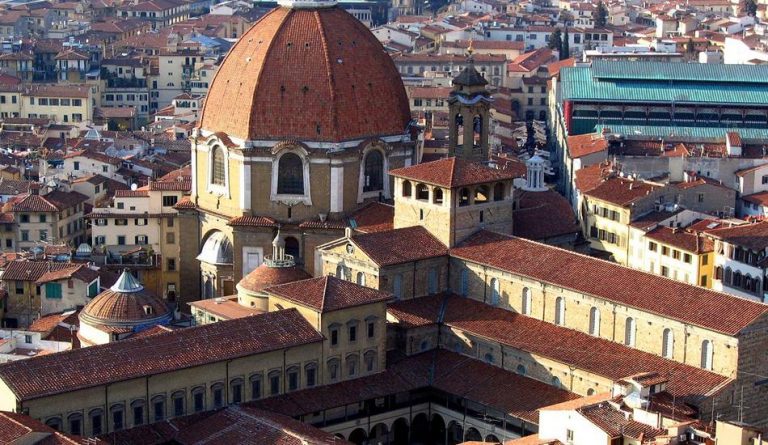 A recently discovered room in the Medici Chapels in Florence contains drawings that have been attributed to Michelangelo. (Image: via Wikimedia Commons)

Could there be anything new from the famous artist and sculptor Michelangelo? In 1975, the museum director of the Medici Chapels in Florence was looking for a new way for tourists to exit the building when he came across an unexplored room. It was filled with coal and was thought to be like any of the other unused rooms in the museum. However, expert analysis soon revealed that the room held artwork by the famed painter Michelangelo.

“Among the drawings was an image that resembles a sculpture in the New Sacristy chamber of the chapel above, which was designed by Michelangelo… The experts also noted parallels between a particular sketch and the artist’s chalk drawing of the Resurrection of Christ, as well as a sketch reminiscent of Michelangelo’s depiction of Leda and the swan… Others appear to show humans flying across the walls, or falling from the sky… And one of the charcoal drawings is thought to be a version of one of the figures in the artist’s paintings at the Sistine Chapel,” according to Daily Mail.

Michelangelo was commissioned by the Medici family in 1520 to design a family mausoleum at their official church. However, he soon betrayed them by aligning with others who were against their rule. As such, the family was sent into exile in 1527. The artist soon came under risk and is believed to have hidden in the room. The Medicis later returned to power and pardoned Michelangelo.

“I think maybe less than half a dozen could possibly be by Michelangelo… It’s a glimpse into something of the culture of the time. These drawings are part of the day-to-day routine of what a bunch of people had to do to put together a complicated and important work like the Medici Chapel,” William Wallace, a Michelangelo scholar at Washington University in St. Louis, said to NPR.

In total, there are about 70 sketches on the walls of the room. The public is currently barred from accessing the room due to security reasons. Only researchers and others with special permission are allowed to visit. However, the room is expected to be opened to the public by next year.

A secret room in the pyramid

Like Michelangelo’s secret room, many hidden rooms have been discovered from around the world that have piqued the curiosity of people. One such hidden room was discovered in the Great Pyramid of Giza in 2017. Researchers used cosmic rays to detect the room. These rays never make it past the upper atmosphere of the Earth. However, they form tiny particles called muons after colliding with air molecules.

It is not known what the purpose of the room was or whether it is connected to other rooms and corridors of the structure. What the discovery made the researchers realize is that the pyramids remain as mysterious as ever and that they know too little about them.