Secrets Behind the Amazing Dance of the Starlings 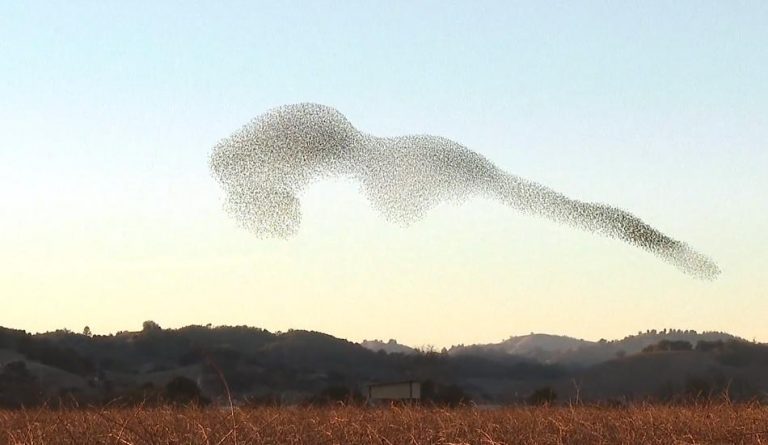 'The Starling and Falcon Dance' was played at the Smithsonian Museum of Natural History. (Image: Vimeo/Screenshot)

A few years back, a video of peregrine falcons hunting European starlings gained the attention of the Internet. Entitled The Starling and Falcon Dance, viewers were amazed at the hypnotic manner in which the birds were moving in the sky. The video went on to win the 2017 Nature’s Best — Windland Smith Photography and Video Contest and was even played at the Smithsonian Museum of Natural History. The mesmerizing movement of the birds is called murmuration and has an interesting science behind it.

In the 1930s, there was a notion that birds must have some kind of psychic power that lets them fly in flocks. Decades later, we now know that this is not true at all. In 2008, an Italian group filmed the starling murmurations and reconstructed their position in 3D, showing the rules that the birds were following while flying as a flock. Basically, the starlings matched the speed and direction of their flight with their nearest seven neighbors.

“When we watch a murmuration pulsate in waves and swirl into arrays of shapes it often appears as if there are areas where birds slow, and become thickly packed in, or where they speed up and spread wider apart. In fact, this is largely thanks to an optical illusion created by the 3-D flock being projected onto our 2-D view of the world, and scientific models suggest that the birds fly at a steady speed,” according to Phys.Org.

Why did the birds evolve such a behavior? A popular theory is that the starlings do this for safety reasons. If they fly alone, they can end up being the target of some other predator. By flying in a group, the bird calculates that it will have safety in numbers. Plus, the swirly, wave-like motion apparently creates confusion among the predators, preventing them from attacking any individual bird from the flock.

The motion of the birds might one day be used in technologies like automated vehicles, which can be programmed to move just like a starling flock. Another application would be in robotic or drone swarms. Back in 1987, a computer scientist by the name of Craig Reynolds created a computer simulation of a flock of birds that was eventually used to generate CGI animal groups in movies. The best example of its use is in the 1992 film Batman Begins in which the simulation was used to create swarms of bats and penguin armies.

A photographer from Spain accidentally took some amazing photos of murmuration back in 2017. The series of photos showed birds flocking together, merging into the shape of a giant bird when they were being targeted by a predator. The surprising thing is that the photographer wasn’t even aware of the event!

“I was taking pictures of the murmurations over several days. Only when I checked the pictures on the computer later, I realized what formation the starlings had created. I was so concentrated on taking pictures at the time that I hadn’t realized that the starlings had created a giant bird in the sky. It took less than 10 seconds for the birds to create that formation. I realized that I had captured a unique snapshot, technically, sharp and in high quality,” he said to the Daily Mail.

The images earned him the top prize at an international photography competition conducted by the Vogelwarte Sempbach bird observatory in Switzerland. He beat over 540 photographers to win the prize.