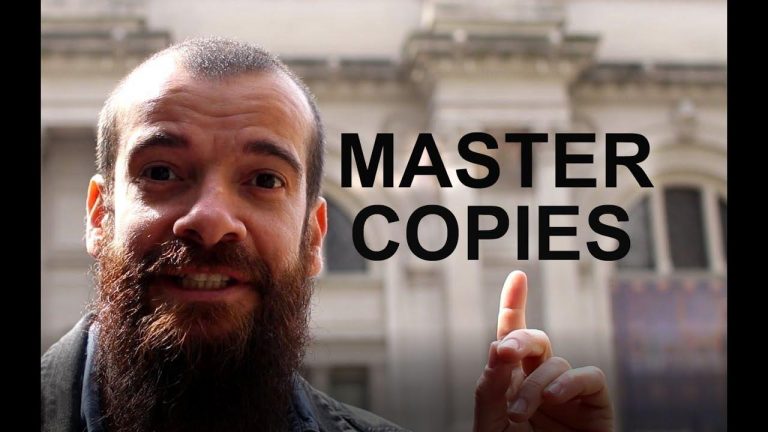 Santos created a YouTube channel with a goal of introducing classical art to those who normally wouldn’t have any contact or understanding of it. (Image: YouTube / Screenshot)

Compared to his time in the boxing ring and then his stint acting and appearing on television, Cesar Santos’s calling as an artist came naturally.

“Everything else I did, there was an internal conflict within me. Every time I was painting or drawing, things were flowing better, even my life. There was more love I was able to express,” said the spunky Cuban-born artist.

Santos’s uncle, Santos Serpa, had nurtured his talent and enthusiasm for painting. When he went to his uncle’s art shows as a youth, Santos felt that he had found his place in the world. Soon, drawing and painting became meditative, a way to process the challenges he was facing while growing up poor in a rough neighborhood in Cuba.

Boxing, Santos’s father thought, would be a good way for his son to face his challenges head-on. And so Santos took up the sport, as well as acting and music. But the visual language of art appealed to him most.

“By practicing art, the people around me felt it; they liked what I had to say with my techniques, my opinions, funniness, or sarcasm. I was receiving a positive response. That motivated me to keep painting,” Santos said. “There was no direction I was going with this other than the sense of freedom and fun I was having while painting.”

Learning from the old masters

Santos felt something was missing from his studies at the New World School of the Arts in Miami, Florida. “When I first studied in the contemporary establishment in the world of the arts in college, [the instructors] were mainly focused on the conceptual aspect of things and the dark side of our personal being,” he said.

But the Angel Academy in Florence, Italy, revealed another side to art. In the place that was once the pulsing epicenter of the art world during the Italian Renaissance, Santos developed his own meticulous style by applying a dutiful approach to understanding the academic techniques that had been preserved and passed down from the old masters.

The best-known artists have been those who added their own challenging points of view to the art world of their time. In the case of Michelangelo, he had a way of seeing the world that so pushed the limits of the visual language at the time that it shocked those around him.

In much of Santos’s life and in the subject he chooses for his art, he also feels an impulse to go against the grain. “I just love to look at my environment and offer something other than what they are proposing. Many times, if one of my friends has an opinion, I will, in a friendly way, point things out from a different point of view,” he said.

This is part of the role of art in society, he believes. Whatever we do and say, we have to take responsibility for it. If we have our own unique way of expressing something, we might be criticized by people who do not accept it, but that is a part of the evolution of art.

Santos stated that in the world of art today, the pendulum has swung the other way from where it was at the time of the Italian Renaissance, when classical knowledge and aesthetics were revived. Now, people are following the trend of “whatever happens, happens,” but he is trying to go against that. He is building on the strength of traditional artistic skills, using basic principles of composition in order to paint like the old masters and create a positive effect.

“So it is actually somewhat provoking to do what I do. Being old-fashioned now is provocative,” he said.

Copying the old masters, Santos believes, is fundamental to developing skills of the visual language needed to better express one’s own vision.

“As humans, we get good at things by copying others. You copy how to talk by listening to your parents. You copy how to walk, how to dance.” If people name something they know how to do really well, invariably they first learned that skill by copying someone else, Santos said on his YouTube channel.

But copying the masters is a misunderstood and misrepresented technique today often associated with disparaging creativity.

Prior to his experience in Florence, Santos thought that painting started with the artist’s creative idea rather than with a visual method. But he now believes that skilled execution combined with a creative idea allows viewers to be attracted to the art and also to understand it. “Now they are respecting you because you are showing them the world from a different point of view” and a new way to think about things, but also something that is executed beautifully.

In fact, in copying the masters, you learn to see differently. “That is the way you become a better painter because you see better, you understand the visual world better. That is what I learned in Florence that was so profound. I learned to understand shadows, to compress dark elements. I saw everything visually with that sensitivity that I never thought of before.”

Developing the necessary skills and mechanics of art helps artists reach a higher level of expression and enables them to articulate their visions much more accurately.

Once the articulation of the visual language is mastered, there is power and depth that comes from simplicity, Santos believes. Growing up without video games, a television, or even a reliable source of water, Santos learned to see the world in simple terms. “I have been living here in America for 20 years, in the developed world, and everything is too easy to have access to,” he said.

“In this [overly] developed world, we are deluged with information that distracts us from our goals and sometimes overshadows the beauty of simplicity. In contemporary art, for example, philosophy has taken over the power of the visual effect; people are looking more at the status of the artists or the description of a work of art than responding directly to its visual power and beauty.

“On the other extreme, artists interested in classical realism nowadays are over-exposed to images of the past and can fall into the trap of presenting images that are repetitive … forgetting that art is about taking people’s psychology to a new place.”

Passing on what he has learned

Despite his desire for a simple approach, Santos does see the value technology offers. The rapidly expanding uses of social media platforms have given artists a direct communication with the public. Etsy, Pinterest, Instagram, Facebook, and a host of other platforms can connect millions of people to artists and their visions.

These platforms, Santos said, give artists freedom beyond the more traditional venues for marketing art like galleries and art shows, which can reach only a small audience. These venues give artists “more space to do what they love because someone out there among millions will be interested in their work. That is the power today that we didn’t have even a few years ago.”

Santos created a YouTube channel with a goal of introducing classical art to those who normally wouldn’t have any contact or understanding of it. His videos, with a new one usually appearing weekly, not only show him painting, but also explore the intricacies and structures of communication with the visual language. He also intends to help younger artists avoid being intimidated by the skill of the old masters.

Cesar Santos has received numerous awards in his career as an artist, including first place in a Metropolitan Museum of Art competition and the Grand Prize and People’s Choice Award in the Academy of Realist Art Boston Figure Painting Competition. Santos is a living master featured in the Art Renewal Center gallery.

Tim Gebhart is an artist and teacher living in Portland, Oregon.