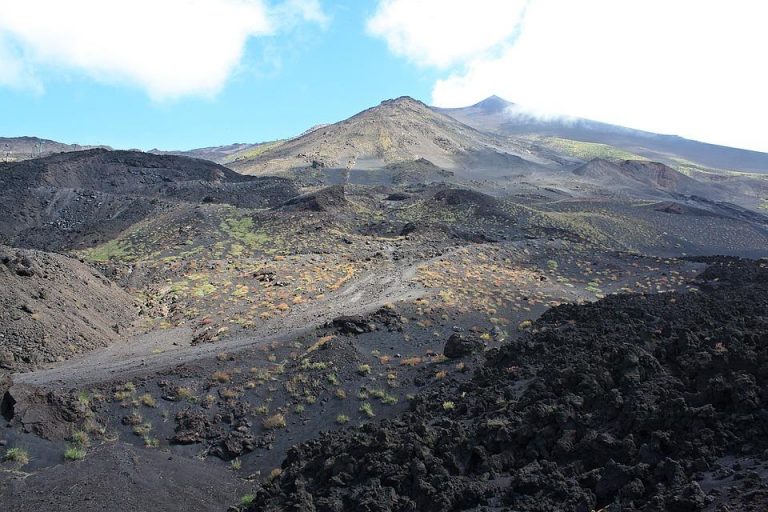 New research suggests forces pulling on Earth’s surface as the planet spins may trigger earthquakes and eruptions from volcanoes. (Image: pompi via pixabay)

New research suggests forces pulling on Earth’s surface as the planet spins may trigger earthquakes and eruptions from volcanoes. Seismic activity and bursts of magma near Italy’s Mount Etna increased when Earth’s rotational axis was furthest from its geographic axis, according to a new study comparing changes in Earth’s rotation to activity at the well-known Italian volcano.

Earth’s spin doesn’t always line up perfectly with its north and south poles. Instead, the geographic poles often twirl like a top around Earth’s rotational axis when viewed from space. Every 6.4 years, the axes line up and the wobble fades for a short time — until the geographic poles move away from the spin axis and begin to spiral once again.

The motion of the spin pole with respect to the geographic poles fixed to the Earth’s crust is called polar motion. Note: The size and speed of the spiral are greatly exaggerated for clarity. Video credit: NASA/GSFC Science Visualization Studio

This phenomenon, called polar motion, is driven by changes in climate due to things like changing seasons, melting ice sheets, or movement from tectonic plates. As polar motion fluctuates, forces pulling the planet away from the Sun tug at Earth’s crust, much like tides due to the gravitational pull from the Sun and Moon.

The tide from polar motion causes the crust to deform over the span of seasons or years. This distortion is strongest at 45 degrees latitude, where the crust moves by about 1 centimeter (0.4 inches) per year. Now, a new study published in AGU’s journal Geophysical Research Letters suggests that polar motion and subsequent shifts in Earth’s crust may increase volcanic activity.

Sébastien Lambert, a geophysicist at Paris Observatory in France and lead author of the study, said:

“I find it quite exciting to know that while climate drives Earth’s spin, its rotation can also drive volcanoes and seismicity.”

The new findings, however, don’t allow scientists to forecast volcanic activity. Although the study suggests earthquakes might be more common or volcanic eruptions may eject more lava when the distance between Earth’s geographic and rotational axes is at its peak, the timescale is too large for meaningful short-term forecasts, according to the authors. But the results point to an interesting concept. Lambert said:

“It’s the first time we’ve found this relationship in this direction from Earth’s rotation to volcanoes.

Previous work has shown the length of a day on Earth, which changes based on the speed of Earth’s spin, also deforms the crust and could affect volcanic behavior. In the new study, Lambert and his colleague, Gianluca Sottili, a volcanologist from Sapienza University of Rome in Italy, wanted to study the relationship between polar motion and volcanic activity.

They focused on Mount Etna because the volcano is well-studied, meaning there’s plenty of data, and it sits just south of 45 degrees latitude. There also weren’t any volcanic crises out of the ordinary at Mount Etna during the study period, which might otherwise mask the signal from polar motion.

Lambert and Sottili used seismic records from 11,263 earthquakes that happened within 43 kilometers (26.7 miles) of Mount Etna’s summit between 1999 and 2019. The team also used records of how much magma erupted from the volcano since 1900. They included 62 eruptions in the analysis, based on the time span between events.

The pair then compared the distance between the geographic and rotational poles at the time each event occurred to determine whether volcanic activity was connected to Earth’s rotation.

Lambert and Sottili discovered there were more earthquakes when Earth’s rotational pole was furthest from the geographic axis — at the point in Earth’s top-like spin when it looks like it is about to fall over. Between 1999 and 2019, those peaks were in 2002 and 2009. An expected peak in 2015 never materialized because one of the oscillations contributing to polar motion has been slowing down.

The team also uncovered a link between the amount of magma ejected during an eruption. Polar motion appears to drive the largest eruptions from Mount Etna, although to a lesser extent than its seismic activity, according to the researchers.

Examining volcanoes in the Ring of Fire to see if Earth’s spin impacts their activity would surely be interesting, Sottili said, who was senior author of the study. Even expanding to other planets might open scientists’ view of how external forces impact volcanoes on the surface, he added.

Provided by: Erin I. Garcia De Jesus, American Geophysical Union [Note: Materials may be edited for content and length.]