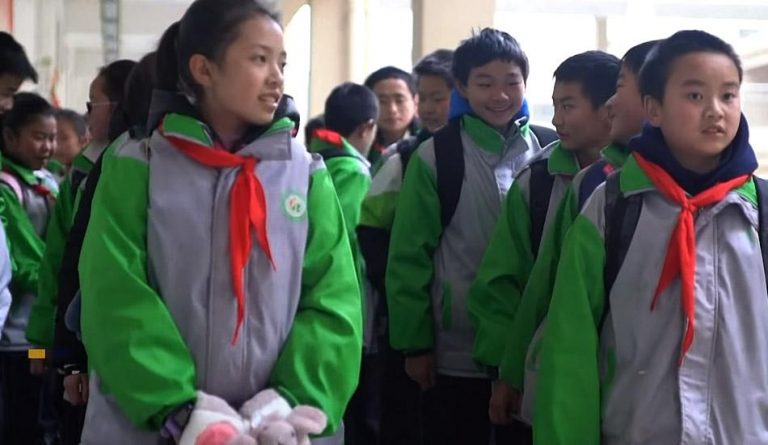 Technologies like smart uniforms and facial recognition are being increasingly used in Chinese schools to keep track of students and their activities. (Image: Screenshot / YouTube)

With the Chinese government bringing every aspect of human life under surveillance, it was inevitable that even children would be monitored. In many Chinese schools, technologies like smart uniforms and facial recognition are becoming a popular tool to keep track of students and their activities.

Last year, about 11 schools in the southwestern province of Guizhou were reported to have made “smart uniforms” mandatory. These uniforms, embedded with two computer chips, were manufactured by the local tech company Guizhou Guanyu Technology. The two chips were inserted in the shoulders of the uniforms and could apparently withstand a temperature of 300°F and up to 500 washes.

“As students enter the school, the time and date is recorded along with a short video that parents can access via a mobile app. Facial recognition further ensures that each uniform is worn by its rightful owner to prevent students from cheating the system. Skipping classes triggers an alarm to inform teachers and parents of the truancy, while an automatic voice alarm activates if a student walks out of school without permission,” according to ABC News.

If a student falls asleep in class, an alarm will sound. Additionally, the chips in the uniforms can also be used to pay for snacks on school grounds. Parents can use the mobile app to track the spending habits of kids, set a limit on their spending, and so on.

On their website, the company claims that the uniforms were designed with the state policy of setting up “smart campuses” in mind. The “smart campus” initiative has its origin in March 2016 when the state government unveiled its 13th Five Year Plan and put forward the goal of making the country a leader in tech manufacturing by 2025.

“In June 2016, China’s Ministry of Education, taking the initiative to follow Beijing’s plan, announced its own ’13th Five Year Plan,’ which called for ‘digitalization of education.’ One example was to transform schools into ‘wireless campuses.’ In February [2018], the concept of ‘digitization of education’ was emphasized again in a directive issued by the Ministry of Education, this time calling on regional governments to take part in helping to develop ‘smart campuses,’” according to The Epoch Times.

Facial recognition systems are more popular and widespread on school campuses than smart uniforms. In June this year, authorities in Guangxi Province instructed all schools and kindergartens in the region to upgrade security systems by the year-end, which would include the implementation of facial recognition as well.

It became a hot topic on Chinese social media last year after a high school in Zhejiang installed facial recognition cameras in classrooms to ensure that students were concentrating on the teaching. A school in Hangzhou installed cameras that tracked students’ faces every 30 seconds to identify their mood and to provide a score to tell whether the kids were paying attention or not. Wang Yaqiu, a China researcher at Human Rights Watch, says that the surveillance of students from a young age is a worrying trend.

“Could the schools use the information to turn ordinary child misbehavior into evidence of infractions and punish students disproportionately? Will the school share the data with the Chinese government that has a record of violating Chinese citizens’ privacy rights and criminalizing peaceful speech?” the researcher said to Daily Mail. Wang believes that such intensive surveillance will only create an environment of fear, stress, and intimidation on school campuses, making them very unsuitable places for kids.