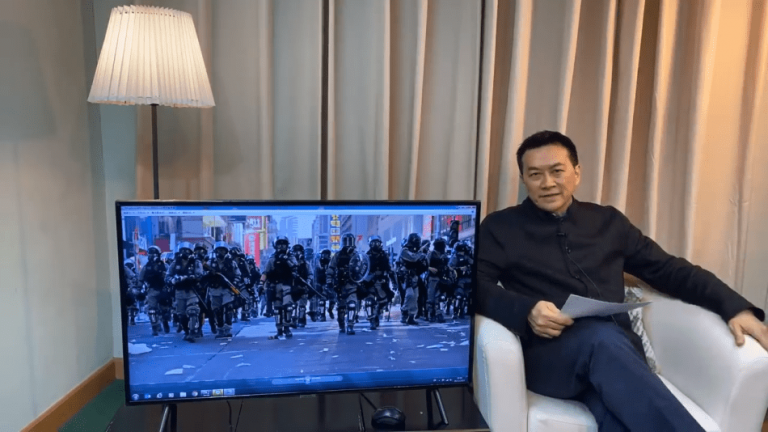 You Qingyuan, founder and editor-in-chief of the 852 Post (852郵報), revealed on his YouTube channel that the gear used by Hong Kong police is causing damage to protester’s spines. (Image: Screenshot / YouTube)

You Qingyuan, founder and editor-in-chief of the 852 Post (852郵報), revealed on his YouTube channel that the gear used by Hong Kong police is causing damage to protester’s spines.

According to the 852 Post report, the new chairperson of the Hong Kong Hospital Authority, Henry Fan, talked to journalists on December 5 about his meeting with emergency room medical staff and realized why they were upset when they offered treatment to the young protesters.

Mr. Fan said these young people were supposed to be the future of Hong Kong, but many of them got arrested, misled, or were seriously injured.

Examining the police gear, it has been revealed that the knee pads are not as simple as they look. The pads are not made from a rubber or synthetic rubber compound but a combination of stainless steel or alloy. As the police subdue the protesters, one tactic is to kneel on the protester’s back as they lay face down on the ground. By doing this, the metal inside the knee pads can cause serious damage to the spine.

It was also noted that another police tactic is to kneel on protesters’ necks compressing the 4th, 5th, and 6th cervical vertebrae of the spine. This dangerous movement is likely to paralyze the protesters.