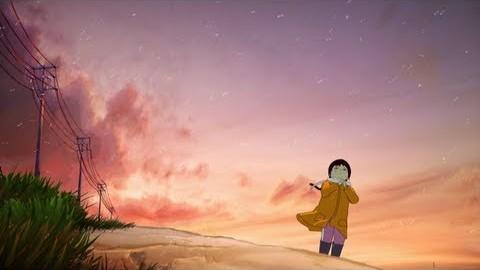 Falun Gong faith in China that is brutally persecuted. More than 4,300 people are identified to have been killed by the Chinese regime just because of following this spiritual path. The numbers for unaccounted deaths are much higher. A group of Falun Gong practitioners created an animation called Little Lotus that exposes how brutal religious persecution can be.

The animation starts off by showing a family practicing Falun Gong in a park. The Chinese police come in and furiously beat up everyone, including the central character, a female child. She watches her parents being snatched away by the police while she is left behind, with blood on her head. After she regains consciousness, she realizes that she is all alone and gets depressed.

When she gets back home, she finds that the house is sealed off. She is unable to get inside. The child sees a family photo lying by the door and picks it up. She apparently goes to live with her grandmother, who also gets taken away by the police. At school, she tries to speak the truth about the incident. However, the teacher scolds her and the school expels her. The animation ends with her being all grown up, practicing Falun Gong, with a picture of her family beside her on the desk.

In the end, the video reminds us that most of the orphans who had their parents taken away by the police have now grown up. However, the persecution of Falun Gong and the massacre of its practitioners continue in China. The animated short movie, directed by Andy E, has won several awards at film festivals like the NOFI 2013, GOIAF 2014, 2013 KLIK! Amsterdam Animation Festival, and AniFestROZAFA 2014. You can watch the animation here.

In July, thousands of Falun Gong practitioners held a demonstration on Capitol Hill calling for an end to the persecution of the spiritual practice in China. Republican Steve Chabot condemned the Chinese regime for its brutal acts against Falun Gong followers. “Wrongful imprisonment, reeducation — brainwashing, really — torture, and forced organ harvesting are the tools they use to stifle [Falun Gong practitioners]… Such tactics have no place in a civilized society, yet they are commonplace in communist China,” he said during the event (The Epoch Times).

Recently, Republican Steve King petitioned the United Nations to help secure the release of two Chinese refugees who had been detained in Thailand. Both prisoners are practitioners of Falun Gong. As such, deporting them back to China would only lead to abuse. In November, a group of Czech politicians expressed concern about the persecution of Falun Gong. One politician pointed out that they themselves are living in a country that carries the insane legacy of communist totalitarianism. As such, turning a blind eye to the Chinese regime’s activities would be an insult to the progress of their own country.

“Be it Falun Gong followers, Christians, Uighurs, Tibetans, and others. The forms of human rights violations in China are really horrific. Organ removal, executions, persecution. It is good for us to remember that it is China we are doing business with. That it is China, whose influence is significantly increasing not only in Europe,” MP Helena Langsadlova said (The Epoch Times).

Thirty MPs from the Lithuanian Parliament also wrote a letter to Xi Jinping, asking the Chinese president to put a stop to the persecution of Uyghurs, Falun Gong practitioners, Catholics, and Tibetans. The letter accused China of colonizing Tibet with the intention to obliterate its traditional way of life.