A Japanese Dementia Restaurant – With Workers Suffering From Dementia 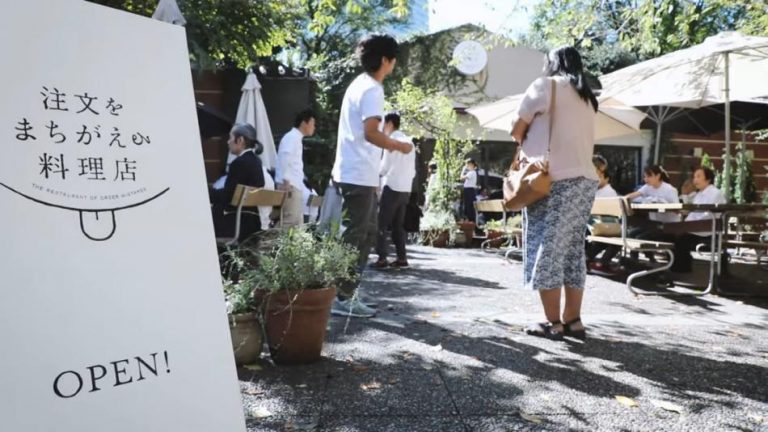 The ‘Restaurant of Mistaken Orders’ was opened in order to spread awareness of dementia in Japan and to make society a little bit more open-minded and relaxed. (Image: Nspirement)

What would you do if you ordered a pizza at a restaurant and the waiter brought you noodles? In most cases, you would get angry or irritated. But at Tokyo’s “Restaurant of Mistaken Orders,” you will likely be amused because this place is run by people who suffer from dementia.

“People believe you can’t do anything for yourself, and the condition will often mean isolation from society. We want to change society to become more easy-going so, dementia or no dementia, we can live together in harmony,” Shiro Oguni, whose idea it was to open the restaurant, said in a video.

Though the restaurant has been structured to avoid potential mistakes, an error does pop up every now and then. Maybe the person serving tea forgets to put in sugar or maybe they forget that the customer wanted extra salt in their dish. But whatever the mistake, the people who visit the restaurant never get angry at the waitstaff. For the customers, it is a unique experience that shows them how difficult life with dementia can be.

Some of the customers are even taken aback when they are actually brought the exact food they had ordered. “To be honest, I was sort of hoping she’d surprise us with something different… But considering the name of the restaurant, getting exactly what we ordered was probably the most surprising thing that could have happened,” a customer who had ordered ground beef steak said to Pacific Standard.

The Restaurant of Mistaken Orders is a pop-up restaurant, meaning that it operates from a certain location only for a brief period of time. Ever since the restaurant began, around 37 percent of all orders are believed to have been mistaken. However, this has not caused any ill-will in customers. In fact, 99 percent of them revealed that they were happy with the service being offered. The Restaurant of Mistaken Orders has popped up in places like Roppongi and Shizuoka. The founders want to set up the restaurant in many more places across Japan.

About 5 million Japanese are believed to suffer from dementia. By 2030, the government expects the number to jump to around 7 to 8 million people, which is about 6-7 percent of its population. A main concern about the growing number of people with dementia is their impact on finances. Though these people suffer from memory issues, the fact is that they hold a vast amount of wealth. As such, the question of whether those who have dementia should be trusted with managing their wealth is something that is being hotly discussed.

“Japanese with dementia will hold about 215 trillion yen ([US]$2 trillion) in financial assets by 2030, compared with 143 trillion yen now… Many companies now face risks in doing business with people with dementia, whose families may return later to ask that the transaction be canceled… A survey by Narumoto and three other researchers found about 30 percent of dementia patients and families have experienced financial losses because of the condition,” according to Reuters.

Earlier this year, the government revealed that they had set a goal of reducing cases of dementia among people aged 70 plus years by 6 percent over the next six years. A report warns that almost 25 percent of people over the age of 65 will have dementia by 2060 even if the rate of the disease remains constant. If the rate increases over this period, people suffering from dementia could account for 33 percent of the population.