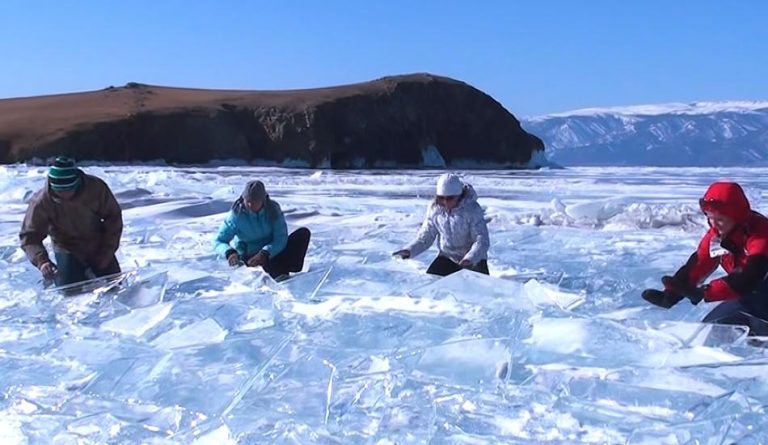 A group of Siberians accidentally discovered that the ice on Lake Baikal could produce a harmonious sound if tapped at the right place. (Image: Screenshot / YouTube)

Ever heard of ice drummers playing music on ice? A group of Siberians accidentally discovered that the ice on Lake Baikal could produce a harmonious sound if tapped at the right place. They then went on and created really “cool” music from the ice-bound waters of the 25 million-year-old lake. According to Natalya Vlasevskaya, an organizer of the percussion group, hearing the music produced by the ice drummers was one of the most fantastic experiences she’s ever had.

“The wife of one of our drummers, Sergei Purtyan, slipped and fell down, and as she landed on the ice, she made a very musical “boooooom” sound — so nice and deep that her husband, who has a very good ear, said: ‘Hold on, what was it? How did you make that noise?’ She laughed but then got curious, too, and they started touching and drumming on the bits of ice, realizing it was making a melody. He recorded it on the phone, got back to Irkutsk and let us listen, asking if we might want to go together to the same spot and try and record our ice drumming,” Vlasevskaya said to The Siberian Times.

They eventually went back to the spot that was around 160 feet from shore. Since the temperature was minus 4°F, the conditions were still good for the ice to remain solid. When the group reached the spot where Tatiana fell, they started thumping on the ice to test how it reacted. Though they played some music, they did not make any recordings. As such, the team went back for a second time and recorded a part of the music the ice drummers played on the frozen ice of Lake Baikal.

After their video became popular, some music experts accused them of faking the entire thing. However, the ice drummers were not bothered by these rumors and were just happy that they got to directly experience something that most people cannot. Interestingly, only the spot where they played was able to produce such harmonious sounds. Other regions of the ice-covered lake failed to produce any distinct melody. You can hear the music here.

Many musicians have experimented with playing on ice. The most popular among them is perhaps the Norwegian musician Terje Isungset. What makes him unique is that he makes his own instruments from ice. Such instruments include guitars, saxophones, harps, “ice horns,” and so on. He has been playing such ice instruments for over two decades. Isungset makes his instrument on the same day of his performance.

“While playing music, you normally do not feel the cold, as music itself heals you in a way. If it is very cold (like below 30 degrees Celsius [minus 22 degrees Fahrenheit]) we have to play a shorter concert, this is also because of the audience… An ice concert can last up until one hour — even indoor or in summer,” Isungset said to Vice. The idea of ice music came to him in 1999 after he played at a frozen waterfall.

According to Isungset, naturally occurring ice has the best dynamic range of sound frequencies. If correctly played, the music produced from such ice tends to be ethereal and highly melodic. In contrast, artificial ice is almost sonically dead. One of his goals is to use ice from the seven continents to create music.