Roger Robinson: How Communist China Will Fall Without American Money 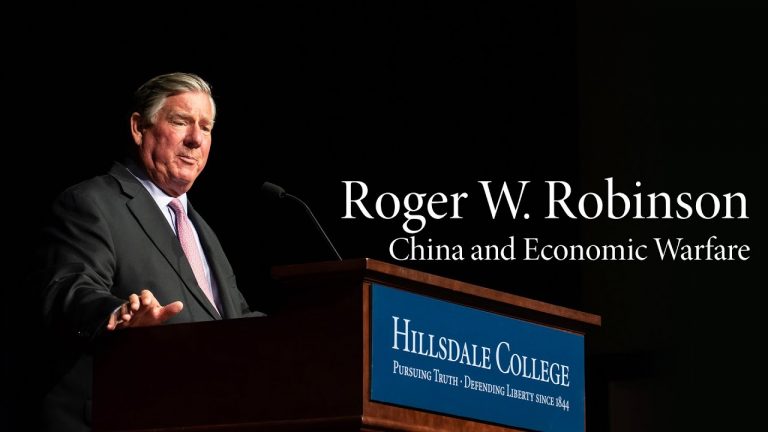 Recently, Roger Robinson, who served as the senior director of international economic affairs at the National Security Council during the Reagan administration, gave an interview to NTDTV in which he revealed his views on China. Here is a brief look at the topics discussed during the interview.

In November 2019, the Thrift Savings Plan (TSP) board reaffirmed its 2017 decision to follow the MSCI ACWI ex-U.S. Investable Market index from 2020. This will allow American funds to be invested in emerging countries like China. A bipartisan group of Senators has urged the TSP board to back away from such a move since most of the Chinese companies do not follow the necessary transparency standards and some of them are involved in activities counter to U.S. interests. The TSP board has dismissed such concerns, calling its decision “prudent.”

However, Robinson is not in favor of the TSP board. He points out that many of the companies in the list are linked with developing military assets for the PLA, human rights abuses, mass public surveillance, and so on. Such companies include HikVision, ZTE, AVIC, etc. Robinson asks the TSP board how the decision using the retirement funds of 5.7 million federal employees to potentially fund the PLA and human rights violations is “prudent”?

Last year, the U.S. placed several Chinese companies on the entity list, essentially banning them from doing business in America. Surprisingly, some of these companies are present in the MSCI Index. Robinson pointed out this disparity, asking how a company that is banned by law in the U.S. can be allowed to raise money from Americans. To make matters worse, these companies use the fact that they have been financed with American money to boost their stature across the world.

Chinese companies are not compliant with federal securities laws, neither are they submitting themselves to PCAOB audits like the rest of the American companies. These firms do not even share their financials, since they are considered “state secrets.” This essentially means that Chinese companies are receiving privileged treatment over American ones. And Robinson is clearly unhappy that America has allowed such a situation to develop.

Almost every Chinese company maintains three sets of financial records. One is used for internal purposes, another is submitted for tax purposes, and a third is submitted to the investors and the general public when the company goes into IPO. When the interviewer asked how an investor can trust the financial records of such Chinese companies, Robinson revealed something interesting.

He said that the investors, like TSP or other large American investment companies, is basically betting on the fact that no matter the financial state of the Chinese firm, Beijing will bail it out if the corporation is in trouble. After all, the Chinese government will not want one of its state-backed firms that received huge international funding to go bankrupt, as it would expose the broken nature of its business ecosystem. China is believed to have US$3 trillion in reserves.

With regard to the Trump administration, Robinson believes that they are looking into the matter and will ensure that America’s interests are not compromised. The Chinese are apparently pressuring the Trump administration to take no action against the funding of Chinese companies through American capital markets, possibly warning that such a move would damage the chances of a trade deal. However, Robinson argues that it cannot be an excuse to look the other way.

China and the US capital market

A usual warning given to the American side is that if they block the Chinese from raising money from the U.S., they will go to other places like Frankfurt, London, Singapore, etc., which will make the American financial market less competitive internationally. However, Robinson does not see this happening. He is absolutely sure that only the U.S. market can fund the voracious capital needs of the Chinese.

Robinson makes it clear that he does not advocate cutting off the Chinese from the American money supply. Instead, what he wants is that U.S. funds are invested only in Chinese companies that are not involved in activities that are against America’s security and values. If China were to lose its unrestricted access to U.S. capital markets, its growth rate could slip by 1  to 2 percent, which would put Beijing in a tough spot.

Robinson states that though China portrays itself as an invincible juggernaut, they are really very vulnerable. Even though Beijing would love to de-dollarize, Robinson reminds the interviewer that such an attempt would not succeed since the U.S. dollar is basically the undisputed reserve currency of the world, a situation that will continue for the foreseeable future.

Robinson hopes that when the American people realize how their money is being used by Beijing to fund military projects against their homeland and other such activities that run against the American spirit, they will take it personally and that it will rally the country to act strictly against the Chinese regime.