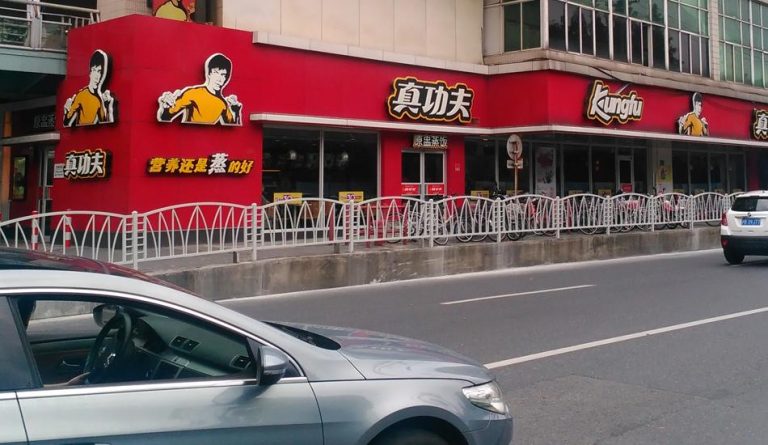 Bruce Lee Enterprises, a California-based firm run by Bruce Lee’s daughter Shannon Lee, has sued a popular Chinese fast food chain called Real Kungfu. The reason — they use an image of Bruce Lee as their logo.

The lawsuit by Bruce Lee’s daughter

Real Kungfu was founded in 1990 and has 600 outlets in 57 cities across China. Its logo depicts a man in a yellow top whose looks and stance match those of Bruce Lee’s famous “ready to strike” position. Shannon Lee’s company has sued for US$30 million in compensation at a Shanghai court while also demanding US$12,615 for legal expenses. In addition, Real Kungfu has been asked to publicly clarify that they have nothing to do with Bruce Lee.

The fast food company has apparently been taken aback by the lawsuit as they had never imagined using Bruce Lee’s image would end up as a legal problem. “The Real Kungfu chain’s logo is one that the company had applied for and obtained after a rigorous screening by the national trademark agency, we have already been using this for 15 years… We are baffled that after so many years we are now being sued, and we are currently energetically studying the case and preparing our response,” the company said in a statement posted on China’s Weibo platform. (BBC).

Since Bruce Lee Enterprises has the sole right to merchandise and license Bruce Lee’s image, Real Kungfu may have no choice but to reach a settlement with the American firm. The Chinese government might be keen to resolve the issue in Bruce Lee Enterprises’ favor in order to showcase itself as a country that protects intellectual property (IP) rights given the criticism it is facing with regards to IP protection. A few months back, Beijing blocked the release of the Hollywood movie Once Upon a Time in Hollywood after Shannon Lee complained about a scene that depicted Bruce Lee in a negative light.

Bruce Lee had a favorite restaurant in Seattle — “Tai Tung.” Started in 1935, it is one of the oldest Chinese restaurants in the region. In recognition of the love Bruce Lee had for the restaurant, the owners have placed a Memorial Booth dedicated to him at the back, with a bench and several pictures of the martial artist.

Bruce Lee apparently was obsessed with ordering the same dish every time he visited the restaurant. “Bruce Lee loved eating oyster sauce beef and garlic shrimp. Every dish is also served with cabbage soup… Bruce Lee would walk into the restaurant, sit at his booth, and the waiter would bring out his dishes to him without ever taking his order,” according to King 5.

Harry Chan, the current owner of Tai Tung, reveals that pork tails, ox tails, and preserved pimento were some of the items that were popular with the public during his grandfather’s era. Today, the menu has changed drastically to keep up with the times. Chan believes that the dishes his restaurant will serve in the future will be different from those being served now.

“We have been here a long time and we have a lot of regular customers and the customers are generations and generations… So far, we have customers who are five generations. And another reason people come here is for the good food, good service, friendly service, and reasonable price,” Chan said to Seattle Refined.

In addition to Bruce Lee, Tai Tung has hosted celebrities like Linda Lee Caldwell, Anthony Bourdain, and Apollo Ono. The walls of the restaurant are decorated with pictures of all the famous celebrities who have visited the place.