History and Myth Come Together in the City of Petra 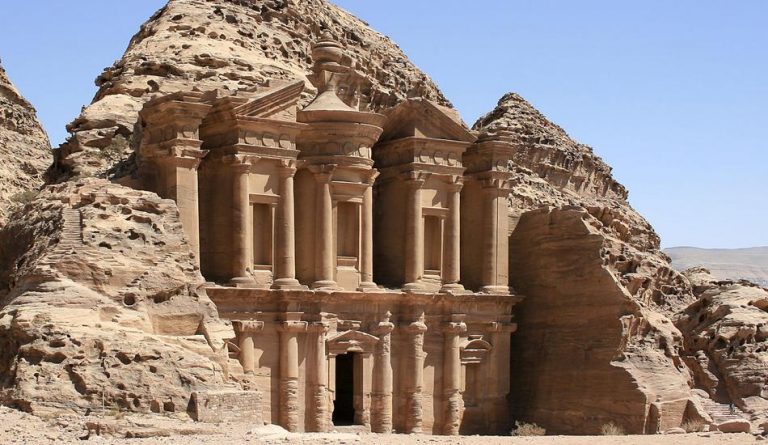 Among all the ancient cities of the Middle East, Petra in Jordan is considered by many to be one of the crown jewels of human architecture. (Image: Diego Delso via wikimedia CC BY-SA 3.0)

Among all the ancient cities of the Middle East, Petra in Jordan is considered by many to be one of the crown jewels of human architecture. More than a million people visited this archaeological wonder last year, which has been classified as a UNESCO World Heritage Site since 1985.

Petra’s fame largely rests on the Nabatean Bedouin tribes that settled in the region around the 4th century to 2nd century B.C. Since Petra was close to major trade routes, the region soon became prosperous as a major trading hub. Petra rapidly developed during the 1st century B.C., with experts estimating the city to have had a population of 20,000 at that time. Considering that the region was basically an arid place and rainfall was limited, it would not feel like an ideal place to set up human habitation. However, the Nabateans did not back down. Instead, they used the geography of the place to their advantage.

“When the tribe built Petra… they developed a unique system of conduits, dams, and cisterns to harvest, store, and distribute rainwater for year-round use. At certain times of year, the area around the city was prone to flooding. However, the Nabateans were able to effectively control these floods using dams and, therefore, the city’s water supply. This meant that they could reside in the city even during periods of drought. It also improved the crop yields of Nabatean farmers,” according to History.

Due to its prosperity, Petra was attacked several times by many powers. In 312 B.C., the Greek empire invaded the city, an event that led to the recording of the name “Petra” for the first time in history. The Greeks were successfully thwarted by the Nabateans. In A.D. 106, the Romans invaded Petra and forced them to surrender. About 250 years later, an intense earthquake destroyed the region. The Byzantines took control of the city for about 300 years. However, Petra never regained the splendor and status it had enjoyed under the Nabateans.

According to local folklore, Petra was created after Moses struck a rock with his staff to bring forth water for the Israelites. Moses’ brother Aaron is believed to be buried at Mount Hor, also known as Mount Aaron. During the 4th century, people used to climb up a mountaintop to visit a shrine believed to be dedicated to Moses’ sister Miriam. However, the location of the shrine is not known today.

Though there are many sites to explore at Petra, the most visited sites by tourists are the Treasury and Monastery. The exquisite rock-cut architecture is sure to make anyone’s jaw drop, especially when you consider that the buildings were constructed thousands of years ago when there were no modern tools. The Great Temple of Petra is another must-visit site.

Though Petra is open for almost all days in a year, “spring and fall offer the most temperate weather, with fantastic light. Summer is beautiful but can turn unbearably hot. January and February are the coolest months, with the occasional downpour… the high elevation means nights are cold. Sunrise and sunset are when Petra truly glows with changing color,” according to National Geographic.

Before you visit Petra, do keep in mind that it is spread over a hundred square miles, which is about four times the size of Manhattan. So if you plan on exploring the city thoroughly, a one-day trip won’t be enough. Once you arrive at Jordan’s capital city of Amman, a taxi should get you to Petra in about three hours.