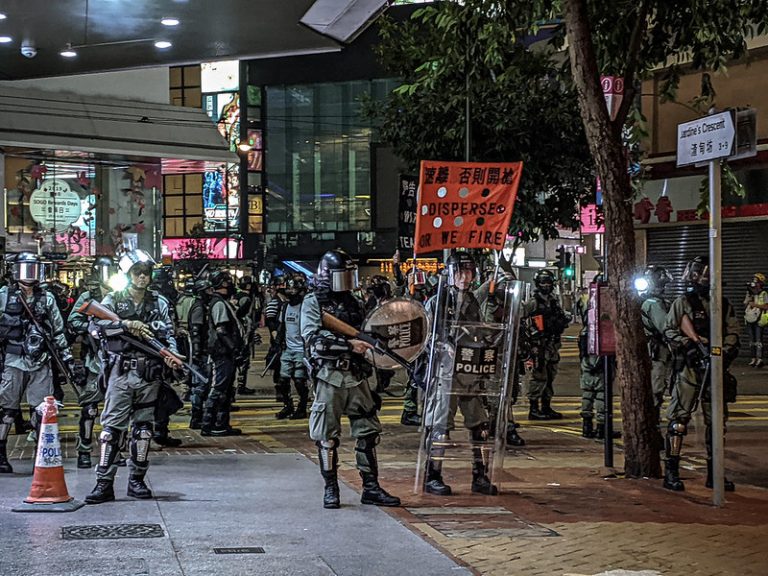 Hong Kong police suspended a part-time officer under suspicion that he aided protesters by leaking the department’s New Year operational plans against them. (Image: Studio Incendo via flickr CC BY 2.0 )

Hong Kong police have suspended a part-time police officer, surnamed Lo, under suspicion that this person was leaking the department’s New Year operational plans against protesters. Lo has become the first police officer to be suspended for misconduct since the 7-month-long protest began.

At the time of the incident, Lo was stationed as an assistant divisional commander of Mong Kok District. He apparently posted a picture and a caption on the messaging platform Telegram, detailing the operations scheduled in the region during New Year’s Eve. The message was posted in a Telegram group of 65,000 people, most of whom were protesters.

The police are currently investigating the case. Lo was tasked with defending the police station that night and has apparently admitted to having taken the picture. However, he has refused to acknowledge that he leaked any plans online. A New Year’s Eve rally ended up in clashes between the police and protesters, with officers firing rubber bullets and tear gas to disperse the crowd.

Meanwhile, rumors started floating around that several police officers had disguised themselves as rioters during the New Year’s Day protests, committing acts of violence and triggering police action against the people. Hong Kong lawmaker Claudia Mo claimed that two undercover officers had vandalized shops in Wan Chai with the aim of using the incident to block a protest that had been scheduled on January 1.

The police have rejected the allegations. “Such accusations were utterly false and founded on fake news… The Hong Kong Police Force respect all citizens’ right to assembly and association, and to express their opinion freely and without fear,” Chief Superintendent Kwok Ka-chuen of the Police Public Relations Branch said in the letter (The Straits Times). Since the allegations were not accompanied by any solid evidence, they have largely been swept aside.

In a letter to Hong Kong Chief Executive Carrie Lam, Human Rights Watch asked that authorities establish an independent, impartial investigation into the alleged use of brute force by the officers against protesters. Since the protests began in June last year, not a single member of the police force is known to have been prosecuted or disciplined for abusing their power and acting violently against the protesting people.

“Hong Kong authorities have international legal obligations to investigate alleged abusive police conduct… They have failed to do so in the face of calls from Hong Kong citizens, legal experts, and rights groups, missing critical opportunities to demonstrate a commitment to human rights and the rule of law,” Sophie Richardson, China director at Human Rights Watch, stated in the letter (HRW).

Civil Rights Observer has accused the police of detaining three of its volunteers after the department went on a mass arresting spree following the huge New Year’s Day march. The organization pointed out that the arrests violated the Johannesburg Principles on National Security, Freedom of Expression, and Access to Information, according to which monitors should not be barred from regions where potential human rights abuses are taking place.