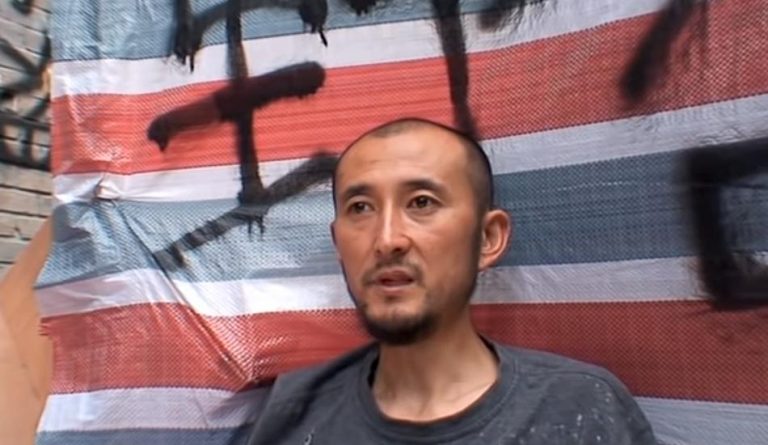 The Chinese regime has arrested artist Yang Licai for his online support of the Hong Kong protests. (Image: Screenshot via YouTube)

In December, the Chinese regime arrested artist Yang Licai for his online support of the Hong Kong protests. PEN America, a nonprofit that promotes free expression in the U.S. and abroad, has issued a statement demanding the Chinese regime release Yang as soon as possible.

“The arrest of Yang Licai is an assault on free speech and artistic freedom. It’s part of an alarming crackdown against Chinese activists and artists involved in pro-democracy protests, who bravely stand up for human rights on a daily basis in the streets of Hong Kong and mainland China,” Julie Trebault, Director of the Artists at Risk Connection (ARC) at PEN America, said in a statement (PEN).

According to PEN, Yang was arrested from the Chinese city of Shenzhen on charges of “promoting disruption.” If convicted, he stands to suffer up to 5 years in prison. The officials raided his house and took away the artist’s computers. Back in 2010, Yang was arrested by Chinese officials for protesting the state-backed demolition of several artists’ studios and homes. He was also arrested for signing a pro-democracy manifesto called “Charter 08” in 2008.

Further details about Yang’s detention are not known. Artist Ai Weiwei, who maintains a strong anti-Beijing stance, tweeted in support of Yang last month with a photo where Yang is shown raising his middle finger. PEN America’s ARC initiative is dedicated to safeguarding artistic freedom and ensuring that artists everywhere can live and work without fear of having to face reprisal. They support the artists through a global network of resources and get their voices heard at the international level.

As of early December, the Hong Kong police had detained over 6,000 people for taking part in the protests, with almost 40 percent of them being students. The police stated that they “have arrested 4,474 males and 1,548 females between 11 and 84 years old, on suspicion of unlawful assembly, rioting and possession of offensive weapons among other offences. Of those arrested, 2,393 were students…  they have used around 16,000 tear gas rounds, 10,000 rubber bullets, 2,000 bean bag rounds, as well as 1,850 sponge grenades since June,” according to Hong Kong Free Press.

About 493 police officers were injured during the same period, with the majority of them being men. The fact that a significant number of the arrested people are youngsters poses a huge problem for the city’s administrators. Experts believe that the gap between young people and officials has grown so wide that it is impossible to bridge. In October, Hong Kong’s number two official, Matthew Cheung, asked parents and teachers to stop kids from participating in illegal/violent activities during protests.

However, many criticized the administration for failing to understand the pulse of the youth. “[The government] says this is ‘heartbreaking’ but doesn’t ask why. Youth is rising up. They know they’re fighting for their future against a dictatorial regime,” Kong Tsung-gan, an author and well-known blogger, said on Twitter (The Guardian). The city’s protesters did not take a break even on New Year’s Day as they held a massive rally in the city, which also ended up in a clash with the police. About 400 people were arrested, with police firing tear gas to scatter the protesters.