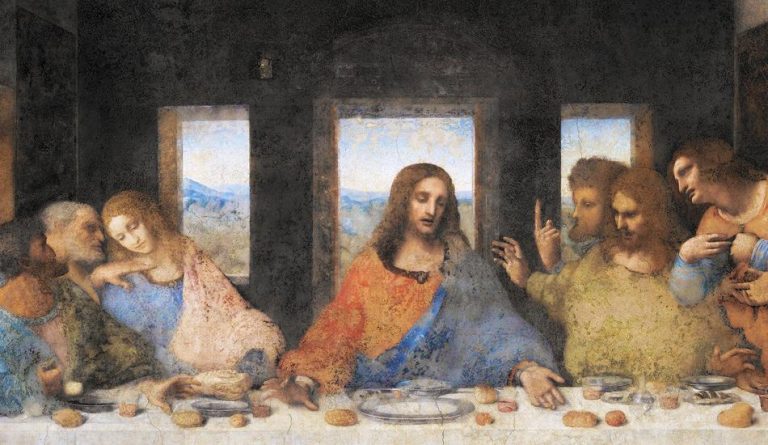 The Last Supper is one of Leonardo Da Vinci's most popular works. (Image: 3444753 via Pixabay)

The Last Supper is one of the most popular works of Leonardo Da Vinci. Depicting the final supper Jesus had together with his disciples before being crucified, the artwork is located in Milan’s Convent of Santa Maria Delle Grazie. The painting measures 180 inches by 350 inches.

6 facts about ‘The Last Supper’

1. A history of survival

The painting has miraculously survived multiple disasters to remain largely intact. Just 20 years after it was created, the painting started fading. The church did not even show any desire to preserve it. During the French invasion of Milan in 1499, King Louis XII wanted to cut down the painting so that it could be transported back to his home. The plan never materialized.

“In 1796, more French soldiers placed it under duress, hurling rocks at it. And in 1943, when Allied forces bombed the area, caretakers of the church had reinforced the painting wall in the hopes it would be enough to keep it safe. The church was severely damaged, but The Last Supper was unharmed,” according to Mental Floss.

2. The feet of Jesus

Da Vinci, like other renaissance painters, made sure that most of his paintings had deep symbolism. In The Last Supper, Da Vinci had painted Jesus’ feet in a “crucifix style,” foreshadowing what was to eventually happen to the Son of God. Unfortunately, not many people realized this symbolism. As such, when a doorway was cut at the bottom half of the painting in 1652, the portion depicting Jesus’ feet was removed.

Artists during that time used to paint on wet plaster. For The Last Supper, Da Vinci tried to experiment with a new technique. He “chose to paint this on dry plaster. The immediate result was a much more stunning piece. The long term problem was that it was not at all durable. It was not unlike painting on a cement wall with Tempura paint and oil. The painting deteriorated quickly and just 150 years later, it was considered to be beyond saving,” according to Patheos.

Da Vinci was notorious for taking a long time to complete a task. While work on The Last Supper began in 1495, it was only completed three years later in 1498. The painting is said to have been only finished because the local monastery constantly pressured Da Vinci to complete the job. Da Vinci apparently got so irritated that he even threatened to use the abbot’s face for Judas.

Many of Da Vinci’s paintings have interesting numerological aspects. As far as The Last Supper is concerned, the number 3 has been depicted very prominently. The number “stands for the Holy Trinity — a biblical concept the painter believed in. The apostles are present in groups of 3 and there are 3 windows at the backside of the apostles and Jesus. Jesus is positioned as a triangle in the painting as well,” according to Daily Art Magazine.

Though this is not certain, some art experts believe that James the Lesser, who was depicted in The Last Supper, is a portrait of Da Vinci himself. The argument is based on a chalk drawing of Da Vinci done by one of his pupils, Francesco Melzi. In the painting, James the Lesser is the second apostle from the left.