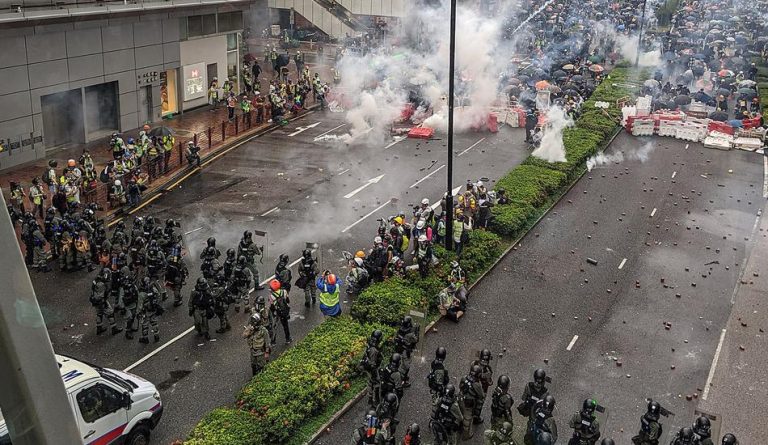 During her entire three-year stay in China, Kirsty came across many such situations where she couldn’t keep her son isolated from the political issues in China. (Image: Studio Incendo via Flickr)

Matthew Connors is a professor of photography from the U.S. who visited Hong Kong and took pictures of the protests. He was arrested by the police and interrogated. Though he was released immediately and put on a flight back to New York, Connors has been banned from entering the city.

“This turn of events has saddened me, both personally and for what it signals about the further erosion of freedoms the government claims to be maintaining. I’ve drawn a lot of inspiration from Hong Kong’s pro-democracy movement these past 7 months and feel lucky to have glimpsed the deep currents of creativity and fervor that are fueling the demonstrators’ demands for greater agency over their futures… The prospect that I may never be able to return is weighing on me,” Connors said to Hong Kong Free Press.

This was his third trip to Hong Kong and the second time he was arrested. When he visited for the first time in August, the police picked him up from a protest site and asked him to show his press pass. When Connors replied that he did not have one since he was independent, he was asked to show identification. Connors presented his faculty identity card and driver’s license.

The police detained him for a few hours and questioned him, particularly about the book on the Egyptian revolution he had published. Connors returned back to New York a week later. In September, he came back to Hong Kong for a second time and shot many photos of the protests. Some of the images were published in The California Sunday Magazine.

The immigration department refused to say anything about Connor’s arrest stating that they do not comment on individual cases. “In handling each immigration case, the Immigration Department will, having regard to the circumstances pertaining to each individual case, decide whether the entry will be allowed or refused in accordance with the laws of Hong Kong and prevailing immigration policies,” it said in a statement (South China Morning Post).

In addition to individuals being banned from Hong Kong, Beijing is also suppressing the activities of foreign NGOs in the city. A spokesperson for Beijing recently accused a few NGOs of supporting “anti-China” forces to create chaos in Hong Kong while also encouraging separationist activities. As such, the NGOs “deserve to be sanctioned,” the spokesperson argued. Human Rights Watch has slammed such criticism, pointing out that it has never promoted any violent action in the city.

“We have called on protesters and individuals who oppose them to refrain from violence. We have also repeatedly called on the Chinese central government, as well as the Hong Kong government, to fulfill the Hong Kong people’s rights to vote and to stand for elections… Rather than target an organization that seeks to defend the rights of the people of Hong Kong, the Chinese government should respect those rights,” the group said in a statement (South China Morning Post).

In addition to Human Rights Watch, the Chinese government has also accused organizations like the National Endowment for Democracy, the International Republican Institute, the National Democratic Institute for International Affairs, and Freedom House of inciting violence during Hong Kong protests. All these institutions are headquartered in the United States.