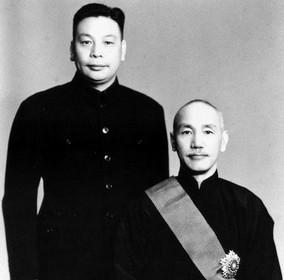 Chiang Ching-kuo (1910-1988) was the eldest son of Chiang Kai-shek and served two terms as President of the Republic of China (ROC) in Taiwan from 1978 to 1988. He was a renowned political leader internationally.

According to polls, more than half the people in Taiwan consider him to be the greatest president they ever had and the one who made the most contributions to Taiwan.

During Chiang’s presidency, his leadership allowed Taiwan to overcome political isolation internationally and economic struggles domestically. While communism swept many Asian countries during that era, Taiwan was able to reject it under his leadership. Chiang’s journey to becoming an outstanding leader is quite an extraordinary story.

When he was young, his father, Chiang Kai-shek, gave him the foundation of a traditional Chinese education. He grew up reading classical books, such as the Four Books and Five Classics (the authoritative books of Confucianism), Shuowen Jiezi (a Chinese dictionary from the Han Dynasty that analyzes and explains the characters used in Chinese writing), and Zengwen Zhenggong Family Letters. After completing middle school, amid the unstable political environment in China, he decided to study abroad and chose the Soviet Union.

The 12 years he studied in the Soviet Union provided him with the most unforgettable and yet the most challenging times of his life. This experience gave him the opportunity to profoundly understand the nature of the Communist Party, and it was instrumental in preparing him to succeed his father as a leader of a generation.

When Chiang Ching-kuo was 16 years old, he joined the ROC in Shanghai with the goal of fighting against the warlords and the invaders of China. He thought of organizing a revolution, but he was alone and weak.

During that time, he was invited to watch movies at the Russian embassy. These movies promoted Russia as a progressive and beautiful country — a paradise on earth. The Republic of China at the time was constrained financially and militarily, but was reluctant to accept support from Russia or tolerate the Communist Party.

The ROC was forced to allow Communist Party members to hold important positions within the administration. He wanted to learn everything he could about the Communist Party and the only way to do that was to study in Russia, just as the Chinese proverb says: “Without going into a tiger’s den, one can’t catch a cub.” He bid farewell to his father and the teacher he had been studying with in China and left for Russia.

Soon, he discovered the truth about Russia. When he arrived in Russia, he learned that the Russian train he took burned firewood as fuel so the speed of the train was incredibly slow. He realized that this country was not as developed as the movies had shown. He began to doubt how it could be called a paradise.

He asked a Russian on the train about it and the reply was: “Revolution is to destroy, so everything must be re-built slowly!” When he saw many Russians begging for food from a Chinese person, he asked: “If Russia is ruled by the proletariat, why do they still need to beg for food?” The Russian said: “They are hooligan proletariat, unwilling to work.”

He realized that the Communists would distort and twist facts, whitewash ugly truths, and reverse right and wrong in order to maintain the Communist Party’s legitimacy to rule.

Chiang Ching-kuo first studied at Moscow’s Sun Yat-sen University and then studied European war history for three years at the Military and Political University, where he learned the strategies and tactics of the Red Army.

Chiang also found out that other colleges, such as Russia Eastern University and Lenin College, recruited a large number of Chinese students to specifically indoctrinate them with the Communist ideology in order to plant the seeds to infiltrate China in the future.

This angered Stalin, the general secretary of the Communist Party of the Soviet Union, who then exiled Chiang Ching-kuo to Siberia to work in the collective farm and then in the Ural Heavy Machinery Plant, a steel factory in the Urals.

Chiang became a miner, performing labor work, and was only given minimum food daily. He also worked as a laborer at the train station and carried heavy goods every day. He slept in trash bins and pig troughs. He even sold his only jacket in exchange for food and lived on garbage disposed by restaurants.

While living in poverty, Chiang Ching-kuo made a lot of friends. One of them, Peter, who suffered along with him for years, was burned to death trying to salvage machinery in the factory. Risking his own life, Chiang Ching-kuo ran into the fire to retrieve his body and buried him. At one point, he was gravely ill, lying unconscious in the boiler room of the station. His four friends took turns to care for him and begged food for him until he recovered.

A friend who studied at the Russian Communist Party school shared a story with him that stuck with Chiang Ching-kuo: “One of the scariest things at school is to tell the truth while asleep and this is a capital crime.”

Chiang Ching-kuo then understood and concluded: “Life in the Communist Party is gloomy; one would feel like waking up from a nightmare if he finally realized that he had been fooled all along by the Communists. His conscience and aspiration for freedom will inspire him to find the will to escape from the cage of the Communist Party. At this juncture, there would be only one of two possibilities — either be discovered unfortunately and be killed, or break out of the cage and run for freedom with wisdom, tactics, and courage.”