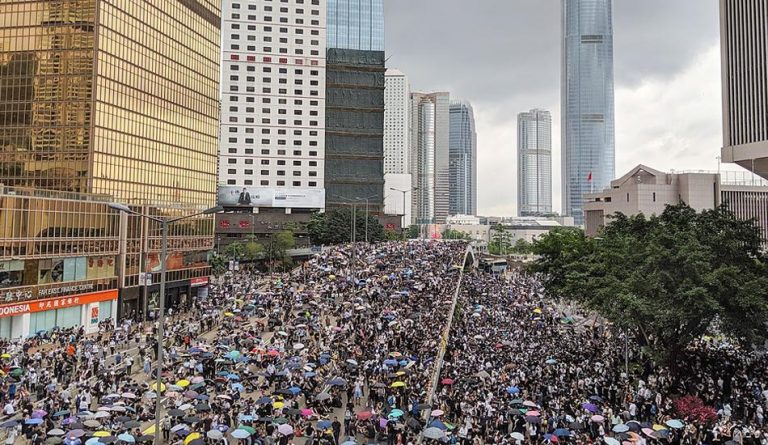 There are protests happening from Hong Kong to Chile, from Iran to the U.S. (Image: Studio Incendo via

During one of the protests in Hong Kong, a woman raised a poster that read “Heaven Will Destroy the CCP.” The statement basically reflects the sentiment of every Hongkonger. The Chinese Communist Party (CCP) has been taken aback at the resilience shown by Hong Kong protestors and their increasing anti-CCP stance. In fact, many people have started wondering whether the Hong Kong protests will, in the long run, end up spreading into China and herald in the removal of the Communist Party.

China without the CCP

When District Council elections were held in November, the results sent a jolt to the CCP. Till then, Beijing had spread a narrative of how the protests are driven due to “foreign influence” and that the “silent majority” actually supports China. Hongkongers overwhelmingly voted against the pro-Beijing camp, clearly signaling that the majority of people in the city wanted to maintain the democratic freedoms of the society.

China is still holding Hong Kong’s democracy by the neck, unwilling to let it go. But now, the Party is not as confident as before. The CCP realizes that one wrong move could not only create chaos in Hong Kong but on the mainland as well. Hong Kong has shown to the world that it can resist CCP influence. Though Beijing strictly censors pro-protest news on the mainland, the truth about Hong Kong’s resistance is filtering down to the common Chinese citizen. And the longer Hong Kong resists, the more chance there is that other parts of the mainland might also start to revolt against the Communist Party.

The next question is whether a revolt against the CCP will succeed. This depends on various factors. A revolution typically turns out to be a success when society is under economic distress. The large-scale unemployment and a decline in the standard of life usually triggers the society to act against the rulers. If China were to experience such economic conditions while the Hong Kong protests are underway, there is a strong possibility of large-scale revolts in the mainland succeeding and the CCP being dethroned from power.

For now, Hongkongers have a simple task ahead — keep fighting the Communist Party in every way possible. “We never thought this day would come so quickly because they said things would ‘remain unchanged for 50 years.’ But now, 28 years before [2047], it already feels like that there’s no such thing [that they have broken their promise]. It’s completely different. Everyone has to come out and resist. At least, first, we have to fight for the remaining 28 years,” ⁠Winnie Wong, an engineer from Hong Kong, said to Bloomberg. 2047 is the year when the “one country, two systems” model officially comes to an end. Until then, China is obliged to allow Hong Kong to function as a democracy.

According to a recent report by the University of Hong Kong, the ongoing protests have caused an enormous spike in mental distress among its citizens. Researchers from the university surveyed 18,000 people between 2009 and 2019. They found a sharp spike after the protests began in June last year. Compared to 2009, almost 1.9 million more adults in the city are estimated to suffer from symptoms of PTSD.

“Hong Kong is under-resourced to deal with this excess mental health burden… With only around half the per-capita psychiatry capacity of the UK and pre-existing average public sector outpatient waiting times of up to 64 weeks, it is important that we enhance mental health and social care providers so that all those in need are able to access high-quality services,” Professor Gabriel Leung from the University of Hong Kong, who co-led the research, said in a statement (CNN).

The prevalence of PTSD in Hong Kong is believed to be six times higher in 2019 compared to the period after the 2014 Umbrella Movement protests. According to official reports, Hong Kong police have detained over 7,000 people in connection with the protests and have fired over 16,000 rounds of tear gas.