An English Pianist Who Plays for Injured Elephants 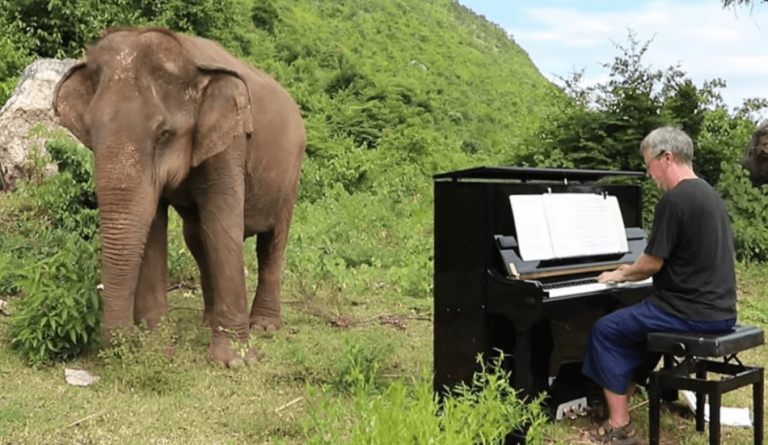 Blind and injured elephants at Elephants World in Thailand are treated to piano music. (Image: Screenshot via YouTube)

Paul Barton is a classical pianist from Britain who spends his time playing the piano to a unique crowd — a group of blind and injured elephants at Elephants World in Thailand.

Playing for the elephants

Well into his late fifties, the idea of playing piano for elephants was something that came into Barton’s mind when he visited Elephants World together with his wife. Barton realized that many of these creatures were old and wondered how they would react to classical music. Intrigued by the idea, he asked the authorities whether he could bring his piano and play it at some open place inside the sanctuary.

Once he got permission, Barton set up his piano and played a piece by Beethoven. Surprisingly, a blind elephant who was eating breakfast and walking by stopped in his tracks and lingered around the piano. Barton believes that this particular elephant was in pain and listened to his piano as the music soothed its mind. Unfortunately, the elephant died of an infection, breaking Barton’s heart.

He has been returning to the sanctuary ever since and playing the piano for other elephants, many of them seemingly moving their heads along with the music. The owner of the sanctuary is happy that Barton spends his time at the place, giving the animals something to enjoy. Barton also uploads videos of his piano sessions online, some of which have attracted thousands of views.

“Elephants are emotional animals, like us, and I’m just following my instincts to play music for them… All I can do is hope that the work we do can make the lives of these rescued elephants a little bit better… I hope that music like this will be part of a process of rehabilitation for elephants that have had stressful lives,” Barton said to News.Com.Au.

Elephants World is located in the western Thai province of Kanchanaburi and acts as a retirement sanctuary for the creatures. The animals are well taken care of, getting nutritious food and regular treatment for physical discomforts. Most of the elephants in the sanctuary are victims of ivory hunters or were abandoned after being used to work on deforestation sites.

Back in 2008, a team of researchers from Queen’s University, Belfast, investigated how music influenced these animals. The team recorded the behavior of four female Asian elephants at the Belfast Zoo for four hours per day over three 5-day periods. The objective of the study was to try to find a way to improve the living conditions of the animals.

“During the first five days the animals were not exposed to any music. In the second five days the researchers placed a speaker in their enclosure playing a CD of classical music by the likes of Mozart, Elgar, Handel and Beethoven. During the final five days the speaker was switched off. The team reported in the journal Animal Welfare that the frequency of abnormal behaviours dropped dramatically while the music was playing whereas normal behaviours, such as feeding, remained unchanged,” according to The Guardian.

In Thailand, conservationist Richard Lair has set up the “Thai Elephant Orchestra,” which is composed of 16 of the animals. These creatures play instruments like harmonicas and steel drums that have been specially modified for their use. Scientists who looked at the music played by these animals found that they are able to keep a stable tempo on a large drum much better than even a human being.