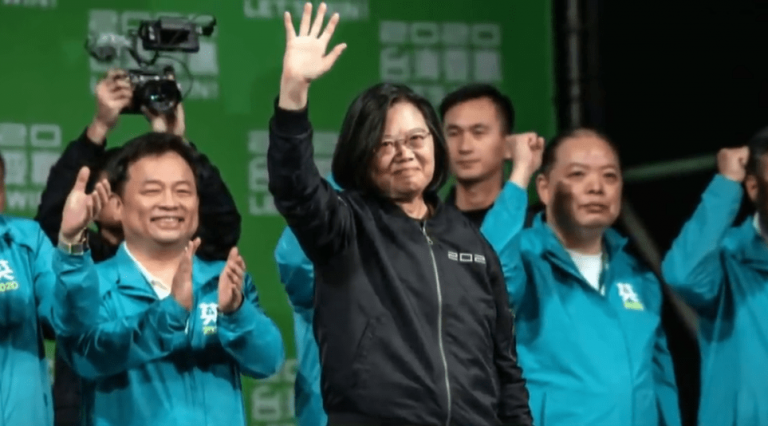 Results of the recent Taiwanese elections came on like a heart attack for Beijing as pro-democracy candidate Tsai Ing-wen won with a massive 57 percent vote share. This is the biggest election victory for a candidate since presidential elections began in 1996. While Tsai secured over 8 million votes, her closest rival, pro-Beijing candidate Han Kuo-yu, was only able to garner 5.4 million votes.

“The results of this election carry an added significance, because they have shown that when our sovereignty and democracy are threatened, the Taiwanese people will shout our determination even more loudly back… I want to once again call upon the Beijing authorities to remind them that peace, parity, democracy, and dialogue are the key to positive cross-strait interactions and long-term stable development. These four words are also the only path to bringing together and benefitting both our two peoples,” Tsai said in her acceptance speech (Focus Taiwan).

Tsai’s win can largely be attributed to two main factors — the ongoing trade war between the U.S. and China, and the anti-Beijing protests taking place in Hong Kong. Since 2018, Tsai has shifted her focus from social reforms to economic growth. The trade conflict between Washington and Beijing is forcing global supply chains to move out of China.

Taiwan can no longer continue to rely on Chinese manufacturing since products from China might get banned or be subjected to increased tariffs in the future in the U.S. Even if China and the U.S. arrive at some sort of agreement, the long-term view held by experts is that international supply chains will focus on Southeast Asia and South Asia more than China. As such, it is in Taiwan’s long-term economic interest that it keeps Chinese influence at bay. People who understood this voted for Tsai.

The anti-CCP protests in Hong Kong acted as a wake-up call for many Taiwanese citizens. Last year, Chinese President Xi Jinping indicated that he wouldn’t rule out military action against Taiwan in order to annex the island. He also proposed that Taiwan unify peacefully with China under the “one country, two systems” framework.

The protests in Hong Kong made Taiwanese people realize that Beijing is not going to uphold its end of the bargain and will try to impose its authoritarian government model on Taiwan. Tsai has been very vocal against Taiwan unifying with China. When compared with pro-Beijing candidate Han, any sensible Taiwanese who supports democracy and freedom would have voted for Tsai.

Derek Mitchell, president of the National Democratic Institute, called the Taiwanese election results a “referendum on China.” “When people say, in China, the people support their government, they all support the … CCP [Chinese Communist Party]. The answer is — how do you know? We see what the ‘silent majority’ says when they’re allowed to speak,” he said at an event (The Epoch Times).

Irked at the overwhelming win of Tsai and her Democratic Progressive Party (DPP), Chinese state media has gone on an offensive against the Taiwanese leader, spreading propaganda that her victory was somehow fraudulent. State-run Xinhua claimed the influence of foreign countries was what led to Tsai’s victory. People’s Daily also parroted the propaganda of foreign interference in an article.

“[Western forces] publicly interfered in Taiwan election… The United States pushed a series of policies supporting Taiwan … and indulged the DPP in fighting the mainland… This is a dirty election without any impartiality,” the article stated (The Epoch Times). The Global Times warned that Tsai and DPP were pushing Taiwan in the opposite direction and will soon become “historical sinners.”

One fake news report targeting Tsai prior to the election claimed that she had spent hundreds of billions of Taiwan dollars to buy voters’ support. Her policy of offering pensions to farmers was classified as “buying support” by both Chinese media and DPP’s opposition party, the KMT.