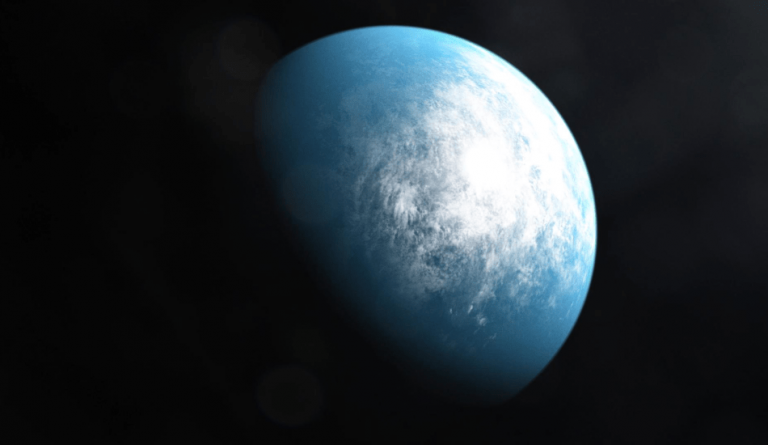 NASA has discovered a planet called TOI 700 d located about 100 light-years away that could harbor life. (Image: via NASA)

Scientists at NASA have discovered a planet that could harbor life. The discovery, made by the Transiting Exoplanet Survey Satellite (TESS), revealed a planet called TOI 700 d located about 100 light-years away, orbiting a red dwarf star that has a mass equivalent to 40 percent of our Sun. The planet is located in the Goldilocks Zone, which refers to the area around a star that is neither too hot nor too cold for water to exist in liquid state.

The star and the planets

Red dwarf star TOI 700 d is located in the southern constellation Dorado. It was initially misclassified in the TESS database as a star similar to the Sun. This made the scientists falsely conclude the planets orbiting it are hotter than they really are. However, the team soon realized their error and recalculated the star’s measurements and the possibility of life on the planets.

“When we corrected the star’s parameters, the sizes of its planets dropped, and we realized the outermost one was about the size of Earth and in the habitable zone… Additionally, in 11 months of data we saw no flares from the star, which improves the chances TOI 700 d is habitable and makes it easier to model its atmospheric and surface conditions,” Emily Gilbert, a graduate student at the University of Chicago, said to Science Daily.

The innermost planet, called TOI 700 b, is a rocky planet that is almost the same size as earth and takes about 10 days to complete an orbit. The middle planet, TOI 700 c, is 2.6 times the size of Earth and takes 16 days to complete one orbit. However, it is a gaseous planet. TOI 700 d is just 20 percent the size of Earth and finishes an orbit in 37 days. All three planets are tidally locked to the star, which means that one side is always receiving daylight.

TOI 700 d receives from its star about 86 percent of the energy that our Sun provides to Earth. Even though this planet is believed to be the most Earth-like among the three, its exact conditions are not known. Scientists at NASA’s Goddard Space Flight Center generated a series of computer models to determine the same. “One simulation revealed an ocean-covered world surrounded by a dense, carbon-dioxide-dominated atmosphere similar to what scientists suspect surrounded Mars when it was young. Another model depicts TOI 700 d as a cloudless, all-land version of modern Earth,” according to Science Focus.

In June last year, scientists reported a couple of Earth-like planets in the Ares constellation, just 12.5 light-years away from us. Orbiting the Teegarden’s star, which is an 8 billion-year-old red dwarf, the two planets are located in the habitable zone and are only slightly heavier than the Earth.

Teegarden b “has a 60 percent chance of having a temperate surface environment, somewhere between 0°C to 50°C [32°F to 122°F] and probably closer to 28°C [82.4°F]. Teegarden c, on the other hand, sits farther out, and has a surface temperature more like Mars, sitting at roughly -47°C [-52.6°F]. Given their minimum mass and their exposure to solar radiation, both planets have made the Habitable Exoplanets Catalog. In fact, Teegarden b has actually scored the highest Earth Similarity Index (ESI) ever,” according to Science Alert.

It is estimated that Teegarden b completes an orbit in about 4.9 days while Teegarden c takes 11.4 days to finish an orbit. Since both planets are some of the closest potential Earth-like planets we have discovered, many expect them to be prime candidates for human colonization when our space travel becomes advanced enough.