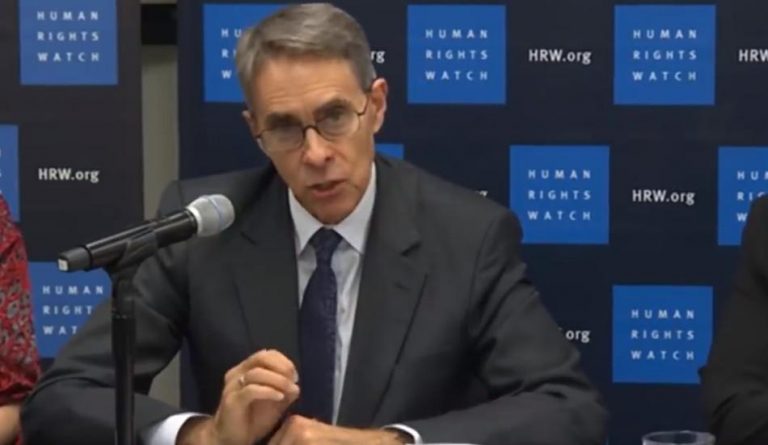 Kenneth Roth, Executive Director of Human Rights Watch (HRW), a U.S.-based rights organization, was denied permission to enter Hong Kong. He was supposed to hold a press conference and release the annual human rights report. Roth was blocked by the immigration officers as soon as he set foot in the Hong Kong International Airport.

“I had hoped to spotlight Beijing’s deepening assault on international efforts to uphold human rights… The refusal to let me enter Hong Kong vividly illustrates the problem… This disappointing action is yet another sign that Beijing is tightening its oppressive grip on Hong Kong and further restricting the limited freedom Hong Kong people enjoy under ‘one country, two systems’… Concerned governments should take a firm stand against China’s creeping repression that massive numbers of people have protested against for months,” Roth said in a statement.

When Roth asked the Hong Kong authorities why he was barred from the city, they refused to give any detailed explanation other than saying that it was for “immigration reasons.”

Human Rights Watch has been highly critical of the way Hong Kong authorities have dealt with the protesters. In a report released in December, the organization revealed that officials had targeted some journalists, denied permits for protests, and prevented first aid workers from providing care to the injured. In another report, HRW condemned the violence unleashed by Hong Kong police on the streets, calling it “excessive” and arguing that some violent acts of the officers violated international standards.

Last month, the Chinese government announced that it would place sanctions on American NGOs like Human Rights Watch as retaliation for the U.S. passing the “Hong Kong Human Rights and Democracy Act.” Roth reminded people that even though he was banned from Hong Kong, what Beijing did to him pales in comparison to what hundreds of Chinese activists have to deal with as part of their protests, including prison terms, torture, and enforced disappearance. He argued that China’s interference in the activities of HRW represents a form of global censorship that needs to be immediately countered. China has justified the ban placed on Kenneth Roth, saying that his organization is somehow involved in inciting violence in Hong Kong.

“Allowing or not allowing someone’s entry is China’s sovereign right… Plenty of facts and evidence show that the relevant NGO has through various means supported anti-China radicals, encouraged them to engage in extremist, violent and criminal activity, and incited Hong Kong independence separatist activities… They bear major responsibility for the current chaos in Hong Kong. These organisations should be punished, and should pay the proper price,” Chinese foreign ministry spokesman Geng Shuang said.

For instance, Article 8 states that “the international community’s concern for human rights matters should always follow the international law and the universally recognised basic norms governing international relations, of which the key is to respect national sovereignty, territorial integrity and non-interference in the internal affairs of states,” according to Express.

What this means is that there is no universal idea of human rights except what the states decide for themselves. If a country were to violate the bare minimum universal human rights according to the UN declaration, others are not entitled to voice their opinion against it since the matter would strictly be considered an “internal issue.”