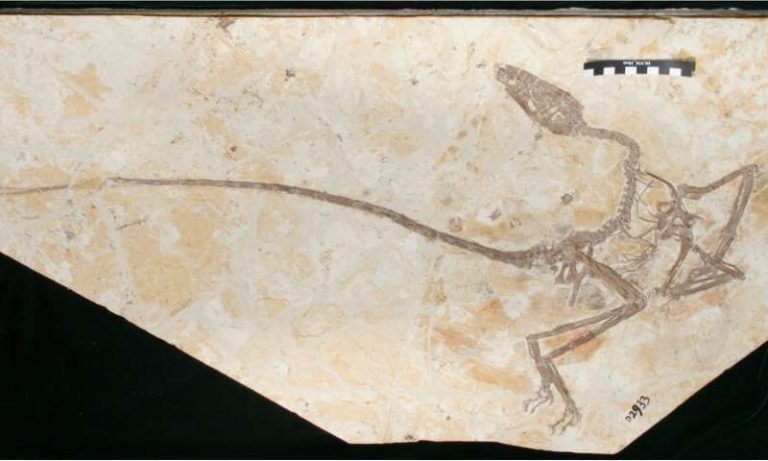 Wulong bohaiensis. The skeleton described in the new paper is remarkably complete. The name means 'dancing dragon' in Chinese and was named in part to reference its active pose. (Image: via Ashley Poust)

A new species of feathered dinosaur has been discovered in China and described by American and Chinese authors in the journal The Anatomical Record. The one-of-a-kind specimen offers a window into what the Earth was like 120 million years ago. The fossil preserves feathers and bones that provide new information about how dinosaurs grew and how they differed from birds. Dr. Ashley Poust, who analyzed the specimen, said:

“The new dinosaur fits in with an incredible radiation of feathered, winged animals that are closely related to the origin of birds.

“Studying specimens like this not only shows us the sometimes surprising paths that ancient life has taken, but also allows us to test ideas about how important bird characteristics, including flight, arose in the distant past.”

Scientists named the dinosaur Wulong bohaiensis. Wulong is Chinese for “the dancing dragon” and references the position of the beautifully articulated specimen.

The specimen was found more than a decade ago by a farmer in China, in the fossil-rich Jehol Province, and since then has been housed in the collection of the Dalian Natural History Museum in Liaoning, a northeastern Chinese province bordering North Korea and the Yellow Sea. The skeletal bones were analyzed by Poust alongside his advisor, Dr. David Varricchio, from Montana State University, while Poust was a student there.

Larger than a common crow and smaller than a raven, but with a long, bony tail that would have doubled its length, Wulong bohaiensis had a narrow face filled with sharp teeth. Its bones were thin and small, and the animal was covered with feathers, including a wing-like array on both its arms and legs and two long plumes at the end of its tail. This animal is one of the earliest relatives of Velociraptor, the famous dromaeosaurid theropod dinosaur that lived approximately 75 million years ago. Wulong’s closest well-known relative would have been Microraptor, a genus of small, 4-winged paravian dinosaurs.

A connection between birds and dinosaurs

The discovery is significant not only because it describes a dinosaur that is new to science, but also because it shows the connection between birds and dinosaurs. Poust said:

“The specimen has feathers on its limbs and tail that we associate with adult birds, but it had other features that made us think it was a juvenile.”

To understand this contradiction, the scientists cut up several bones of the new dinosaur to examine under a microscope. This technique, called bone histology, is becoming a regular part of the paleontology toolbox, but it’s still sometimes difficult to convince museums to let a researcher remove part of a nice skeleton. Poust added:

“Thankfully, our coauthors at the Dalian Natural History Museum were really forward thinking and allowed us to apply these techniques, not only to Wulong, but also to another dinosaur, a close relative that looked more adult called Sinornithosaurus.”

The bones showed that the new dinosaur was a juvenile. This means that at least some dinosaurs were getting very mature-looking feathers well before they were done growing. Birds grow up very fast and often don’t get their adult plumage until well after they are full-sized. Showy feathers, especially those used for mating, are particularly delayed. And yet here was an immature dinosaur with two long feathers extending beyond the tip of the tail. Poust explained:

“Either the young dinosaurs needed these tail feathers for some function we don’t know about, or they were growing their feathers really differently from most living birds.”

An additional surprise came from the second dinosaur the scientists sampled; Sinornithosaurus wasn’t done growing either. The bone tissue was that of an actively growing animal and it lacked an External Fundamental System — a structure on the outside of the bone that vertebrates form when they’re full size. Poust said:

“Here was an animal that was large and had adult looking bones: We thought it was going to be mature, but histology proved that idea wrong. It was older than Wulong, but seems to have been still growing. Researchers need to be really careful about determining whether a specimen is adult or not. Until we learn a lot more, histology is really the most dependable way.”

In spite of these cautions, Poust says there is a lot more to learn about dinosaurs, adding:

“We’re talking about animals that lived twice as long ago as T. rex, so it’s pretty amazing how well preserved they are. It’s really very exciting to see inside these animals for the first time.”

About the Jehol biota

The area in which the specimen was found is one of the richest fossil deposits in the world. The Jehol biota is known for the incredible variety of animals that were alive at the time.

It is also one of the earliest bird-rich environments, where birds, bird-like dinosaurs, and pterosaurs all shared the same habitat. Poust said:

“There was a lot of flying, gliding, and flapping around these ancient lakes.

“As we continue to discover more about the diversity of these small animals it becomes interesting how they all might have fit into the ecosystem.” Other important changes were happening at the same time in the Early Cretaceous, including the spread of flowering plants. “It was an alien world, but with some of the earliest feathers and earliest flowers, it would have been a pretty one.”

Provided by: San Diego Natural History Museum [Note: Materials may be edited for content and length.]