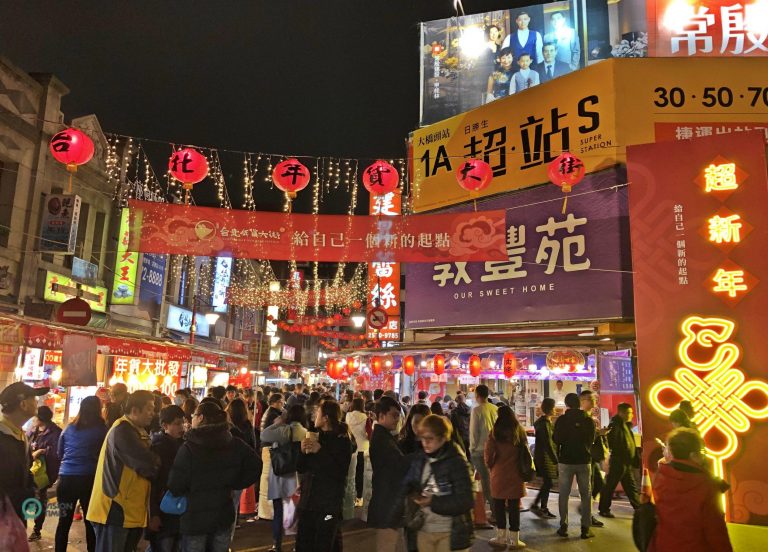 Lunar New Year, also known as the Chinese New Year or Spring Festival, is the grandest festival in Taiwan. Shopping at the bazaars in Taiwan in the run-up to the Lunar New Year’s Eve is, therefore, something indispensable for almost every household.

Please watch the following video of the 2020 Lunar New Year Bazaars in Taiwan.

With the theme of “Super New Year (超.新年),” the carnival-like Taipei Chinese New Year Street Bazaar this year is held concurrently at Taipei City’s nine commercial districts, including Dihua Street, from January 10 to 23.

Most striking of the bazaars in Taiwan is on Dihua Street

As always, the most striking of the street bazaars in Taiwan is on Dihua Street again this year. It is always packed with shoppers and visitors during this shopping season, as it is traditionally the iconic distribution hub for dried food and groceries in Taipei.

In fact, the 800-meter-long old street, which was constructed in the 1850s, was once the most important commercial trading center in Taiwan, particularly for Chinese herbal medicine, fabrics, tea, and rice. At the time, the top five major foreign firms all had branch offices on this street for the exportation of camphor and tea.

In addition to the existing 180 shops, there are over 300 more vending booths set up on the two sides of Dihua Street during the Bazaar. New Year items sold at the Bazaar include prepared food, dried items, Peking Duck, Jinhua ham (Chinese ham), fish, snacks, sweets, handicrafts, gifts, toys, clothes, and other grocery and decoration items.

In addition to purchasing Lunar New Year items, many locals and foreign visitors also visit the old street to experience the traditional New Year shopping atmosphere and to taste the sheer array of free samples of peanuts, pistachios, dried squid, candies, soups, cakes, and other treats.

As many Taiwanese believe flowers are symbolic of happiness, wealth, prosperity, and fortune, it is one of the important items that local people tend to buy before the Lunar New Year Eve. Taipei Lunar New Year Floral Bazaar (台北新年花市) at the Jianguo Holiday Flower Market (建國假日花市) is a popular destination for a wide variety of flowing bouquets. It was established in 1982 under the sponsorship of the Taipei City Government and the Taipei Farmer’s Association.

Spanning over 2 acres (8,000 sq. meters) and stretching 0.3 miles (almost half a kilometer), the Taipei Jianguo Holiday Flower Market is not only the most famous floral bazaar in Taiwan, but also one of the largest outdoor flower markets in the world.

There are over 200 booths in the market, spanning both sides of an entire block beneath the bustling Taipei Jianguo overpass. A massive array of beautiful flowers, plants, bonsai trees, and other Lunar New Year items, as well as gardening items, are sold at affordable prices from January 18 to 24.