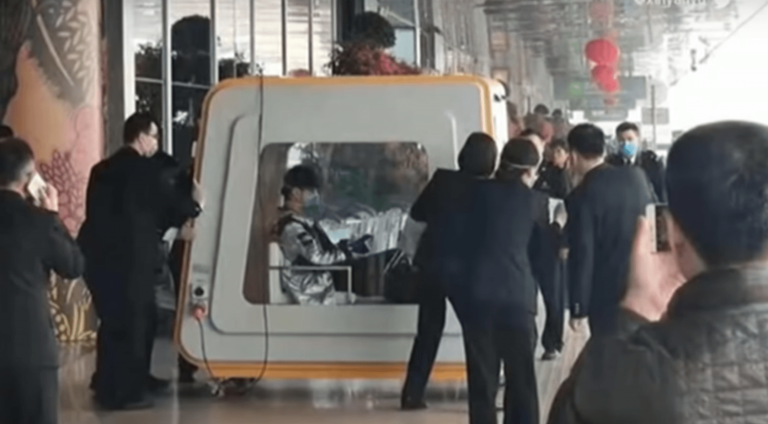 A man, infected by the deadly new coronavirus, is transported in a sealed container through an airport in China. (Image: Screenshot via YouTube)

Authorities in China have imposed indefinite travel restrictions on tens of millions of people across 10 cities. This is in an unprecedented effort to contain the spread of a deadly new coronavirus, as hospitals at the epicenter of the outbreak struggle to handle a surge in new patients.

The coronavirus, which was first discovered in the city of Wuhan in Hubei Province has spread to almost every province in China, with the number of infections rising to 846 and 26 reported deaths. As of this writing, a coronavirus patient died in northern Hebei Province — making it the first death outside Hubei Province. A small number of confirmed cases have also been found outside of China, including Thailand, the U.S., Taiwan, Hong Kong, South Korea, Japan, Vietnam, and Singapore.

The week-long Lunar New Year holiday, which begins on January 24, has led to concerns that the outbreak could quickly accelerate, as hundreds of millions of people travel across the country to visit friends and relatives.

Wuhan, the largest and most populous city in central China, was placed under lockdown on January 23, while public transport has been suspended in nine neighboring cities. Numerous other measures and restrictions on public gatherings have also been implemented in the region. Around 35 million people could be affected.

An atmosphere of intense fear and anxiety

Posts on social media show an atmosphere of intense fear and anxiety among those inside Wuhan, amid rising uncertainty over the ability of authorities to handle the potential epidemic. People spoke of sick family members turned away from hospitals due to a lack of beds, or wards packed with feverish patients and limited screening or quarantine.

Video from Chinese social media appears to show hospitals in the city totally overwhelmed. In one video, a hospital corridor appears to be flooded with patients waiting for test results. In another, medical workers tend to patients wearing full protective suits.

Watch this video from inside the sealed-off city of Wuhan:

The Wuhan Municipal Health Commission acknowledged in a statement that there was a shortage of beds and long outpatient queues in the city. In response, it said seven hospitals will now be used solely for fever patients and more than 3,000 beds will be made available for suspected and confirmed cases of the coronavirus.

Medical workers in Wuhan have described an incredibly intense environment, where they must balance dealing with the overload of patients and suspected patients while also keeping themselves safe.

Beijing and Shanghai are now on the highest alert for a public health emergency, according to government officials in both cities. This will allow authorities to regulate daily essentials like water, electricity, and food. Officials can also take preventative measures against the hoarding of medical and protective supplies and price gouging.

Shanghai Disneyland and other tourist sites across the country plan to shut down, at an unknown cost to the economy. Other measures could include restricting public meetings and events, declaring outbreak zones, and quarantining suspected cases.

At this writing, the World Health Organization is set to reconvene after an emergency committee of international health experts was split on deciding whether the coronavirus should be classified as a “public health emergency of international concern,” Director-General Tedros Adhanom Ghebreyesus told journalists. That gives the organization the power to set temporary recommendations to coordinate a global health response with its 196 member countries.