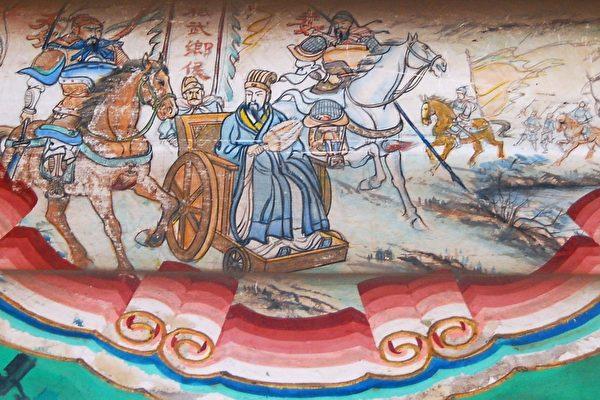 Zhuge Liang was an ancient Chinese military strategist during the Three Kingdoms era of China, 220-280. His parents passed away when he was very young. He then moved to Long Zhong, approximately 13 kilometers away from Xiangyang, Hubei, China, with his uncle. Zhuge Liang was talented, tall, and very handsome. Despite these attributes, he was still unmarried when he was 25 years old, which was considered late for a Chinese man in ancient times.

Zhuge Liang made friends with a local well-known scholar, Huang Chengyan. Huang appreciated Zhuge Liang’s character and knowledge. Upon learning that Zhuge Liang was ready to take a wife, he told him: “I have a daughter who does not have good fortune. Her complexion is dull and her hair is in poor condition but I believe she might be as knowledgeable as you are. Would you like to marry her?”

Zhuge Liang had already heard of Huang Chengyan’s unusual daughter, Huang Yueying. She was very talented when she was little. Her knowledge was expansive and ranged from astronomy to geography and everything in between. She had learned almost every military strategy book at the time. So Zhuge Liang agreed to marry this intelligent woman.

He went to Huang’s home to propose marriage. Huang Yueying gave him a feather fan and asked Zuege if he understood why. Zuege said: “This implies ‘It’s the thought that counts.'” Huang asked him: “And the second reason?” Zhuge did not understand. Huang explained: “I’ve noticed when talking about international affairs with Father, you looked ambitious and confident. When you spoke of embarking on your future journey, you looked delighted. However, when you talked about your rivals, Cao Cao and Yuan Shao, you were worried and frowned. The feather fan is for you to hide your facial expressions.” Huang Yueying understood that a great man cannot expose his emotions when working on critical matters. He should be calm and patient since revealing his emotions cannot lead to success. As he came to critical moments in decision-making, he could pause for a second and hide his face behind the fan to calm down.

After marrying Huang Yueying, Zhuge Liang continued to use the feather fan all the time. At every critical moment of life and death during his expeditions, such as the historically famous story Six Campaigns from Mount Qi, Borrow Arrows with Thatched Boats, and Empty Fort Strategy, he would gently wave the feather fan as if he knew everything and was unsurprised. This was credited to his wife, Huang Yueying.

Huang Yueying was so talented that she created various kinds of useful tools. She invented the wooden grinding machine, the wooden dog, the wooden tiger, and even a wooden man. Zhuge Liang was constantly surprised and admiring. According to historical literature, the “Wooden ox and flowing horse” invented by Zhuge Liang was a single-wheeled cart with two handles allowing large armies to transport food. This was inspired by his wife, Huang Yueying. He just took Huang’s idea and modified it.

Huang Yueying was very dedicated and devoted to her family. Shortly after their marriage, Zhuge Liang then embarked on his journey with the warlord, Liu Bei, spending most of the time on expeditions. Huang Yueying was responsible for all domestic matters, dealing with everything well and becoming a strong supporter of Zhuge Liang.

After Zhuge Liang passed away, Huang Yueying passed away soon after due to her ailments. Before approaching her end, she encouraged her son Zhuge Zhan to value “Loyalty and Filial Piety.” Later on, Zhuge Zhan sacrificed himself for the nation and died a glorious death.

A person with great moral character in the past valued virtue. Zhuge Liang had only one wife in his whole life. This means that he valued virtue and took the desire for a woman very lightly, which is truly the sign of a virtuous man.