Promises, Promises: Will China Buy US$200 Billion Worth of Goods as Agreed? 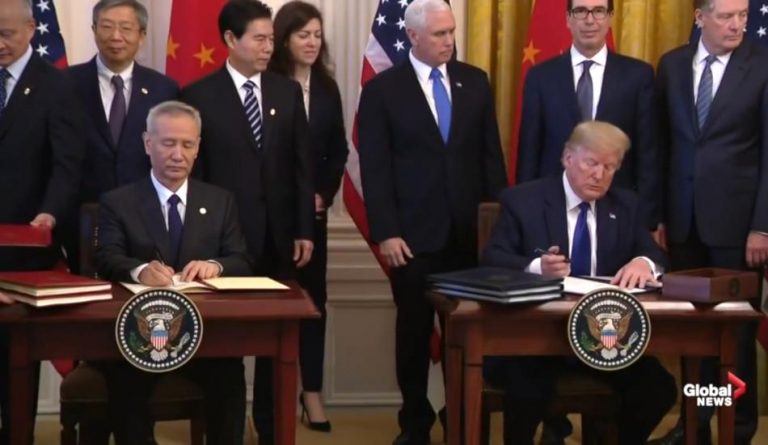 China has committed to buying US$200 billion worth of goods from America in the next two years. (Image: Screenshot / YouTube)

In the recently signed Phase 1 deal between the U.S. and China, Beijing committed to buying US$200 billion worth of goods from America in the next two years. However, many experts have raised doubts as to whether this will actually be possible.

Data from the General Administration of Customs in China shows that Chinese imports of American goods fell from US$155.1 billion in 2018 to US$122.7 billion in 2019. As such, if Beijing were to make purchases worth US$263 billion in 2020, imports from the U.S. would have to more than double this year compared to last year. This seems like an impossibility since such a huge jump in purchases would require China to sacrifice business with other nations, a move that can damage relations.

For instance, the trade war between the U.S. and China made Chinese soybean importers sign contracts with Brazilian businesses a few months back. Chinese firms won’t be able to simply walk away from these contracts without repercussions. Plus, Beijing can’t force Chinese companies to import American products when cheaper alternatives are available. Such a move would only increase the price of daily commodities and create resentment in the public against the government. This is why the U.S. National Farmers Union (NFU) wasn’t very enthusiastic about the trade deal. According to President Roger Johnson, the Chinese have made and broken numerous deals in the past two years which makes the union skeptical.

There is also the chance that the entire agreement itself could fall apart. According to Richard Martin, managing director at management consulting firm IMA Asia, the fact that government-mandated trade has a low historical success ratio does not evoke confidence in the success of the Phase 1 deal. Plus, the agreement allows both parties to walk away whenever they want. So if the U.S. were to determine that China is not following the rules and implements a penalty, Beijing can choose not to observe the agreement. This basically means that China’s proposed US$200 billion purchase from the U.S. is only a possibility, not a concrete promise.

The trade deal between the U.S. and China has sparked off a heated debate on Chinese social media, with many people accusing the regime of selling out the country on unfair terms. Chinese citizens are under the false impression that their country is conceding too much while America is gaining disproportionately through the deal.

“Some Chinese netizens can’t understand the real situation of the phase one trade deal, and have been fooled by the government for more than 20 months… The phase one trade deal is trying to balance U.S.-China trade, and helping China to set up the mechanisms of intellectual property protections, and so on… But Chinese people can’t understand it now and think the deal means Liu He (Vice Premier) is surrendering,” U.S.-based China affairs commentator Tang Jingyuan said to The Epoch Times.

State-run media have been projecting the trade deal as a big win for China. An article in Xinhua claimed that the deal was an important development in the right direction and that it brought “positive energy” to the global economy. People’s Daily stated that the deal is necessary for China’s economic innovation and development.