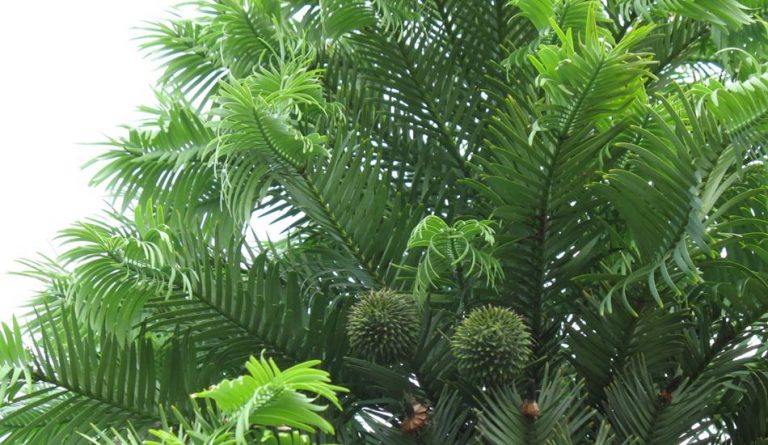 ‘Wollemi pines,’ also known as ‘dinosaur trees,’ have been on the planet for millions of years. (Image: Akerbeltz via wikimedia CC BY-SA 3.0)

With fires consuming a significant portion of Australia’s plant and animal life, the government acted swiftly to protect a very unique species of plants. The plants, called “Wollemi pines,” but popularly known as “dinosaur trees,” have been on the planet for millions of years. The trees are located in Wollemi National Park.

“It was like a military-style operation… We just had to do everything… Wollemi National Park is the only place in the world where these trees are found in the wild and, with less than 200 left, we knew we needed to do everything we could to save them,” Matt Kean, NSW Environment and Energy Minister, said to The Sydney Morning Herald.

The operation to save the Wollemi pines was kept a secret. This is due to the fact that the location of the pines is itself a secret since contamination from pathogens brought in by people could cause huge damage to the tree population. The Rural Fire Service collaborated with the National Parks and Wildlife Service (NPWS) to keep the trees safe.

As fires approached the pines, NPWS crewmembers were dropped in the area and they operated the irrigation system to keep flames away. Helicopters were called in to drop water on the edge of the fires so as to prevent them from spreading to the pines. The threat was at its highest at the end of last year. At one time, the authorities were completely clueless for four days as to whether the pines had survived or not.

Most of Wollemi National Park has been burned down by the Gospers Mountain fire that ravaged more than 1.2 million acres of the park. The fire is believed to have been started by lightning on October 26 and is said to be the largest-ever fire triggered by a single source. Despite the massive losses suffered by the park, authorities are relieved that at least the Wollemi pines are safe.

Wollemi pines were thought to have been extinct. But in 1994, a national park worker surprised scientists by reporting the tree. The site of the pines has been kept a secret ever since then. Researchers cloned the trees and the offspring were auctioned off, with the money raised from the sales used to fund more studies on the tree. In 2006, the official nursery at Queensland released a large number of Wollemi pine seedlings.

“Every major nursery in Australia stocked potted Wollemi pines for sale to a public who were keen to own a piece of ancient life and help ensure it didn’t go extinct. Enthusiasts around the world also bought their own dinosaur trees… Special Wollemi pines are also in the diplomatic service, having been presented by Australian prime ministers and foreign affairs ministers to various dignitaries,” according to The Conversation.

Wollemi pines can survive in temperatures ranging from 23°F to 113°F. The trees are usually slow in their growth. But if the environment has good moisture and light, a tree can grow about 1.5 feet per year. These pines are capable of producing coppice or epicormic shoots when faced with fire or drought. It is believed that this ability is what allowed the trees in the park to survive for this long.

The pines produce three types of foliage depending on the age of the leaf and position on the tree. “New foliage is frond-like and apple green. As the plant grows the foliage changes to a blue-green color and becomes more Jurassic-like in appearance with two rows of leaves on the branches. In cold seasons the foliage changes again, to a bronze hue. The bark of older trees also changes with age and resembles bubbling chocolate – due to numerous spongy nodules covering the trunk,” according to Global Trees.

The International Union for Conservation of Nature (IUCN) has classified the Wollemi pine as a “critically endangered” species. It is legally protected in Australia.