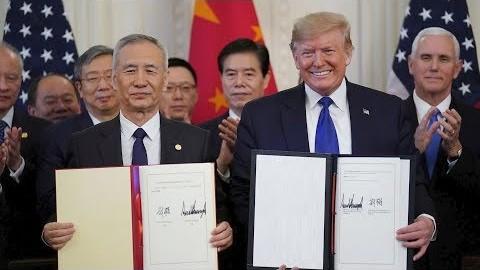 With both U.S. and China signing the Phase 1 trade deal, optimism has returned to the markets. (Image: Screenshot / YouTube)

With both the U.S. and China signing the Phase 1 trade deal, optimism has returned to the global economy markets. Many investors believe that the deal represents the first step in the eventual normalization of trade relations between the two economic superpowers. However, the agreement introduces the concept of “managed trade,” which can eventually affect the existing open market trade policies followed by the world.

The Phase 1 deal makes China commit to US$200 billion worth of purchases from the U.S. over the next two years. According to estimates by the White House, the purchases will be roughly split in the following manner — US$80 billion worth of manufactured goods, US$53 billion worth of energy products, US$35 billion in services, and US$32 billion in agricultural goods. The U.S. mandated such a commitment from China so as to bridge the trade deficit between the two nations.

This might seem like a reasonable enough argument. However, what America has done with the trade deal is to end the concept of free trade that it has promoted over the past few decades. In a free trade economy, nations do business with each other based on the price and quality of products. No nation favors or disfavors another and provides equal opportunity to businesses from all countries. This has been the foundational economic policy of the U.S. and the West in general. By requiring China to buy US$200 billion worth of goods, the idea of an open, free market is now gone.

“Price signals are out, quantitative commitments are in. Other countries that export to China — like Brazil, which has filled the breach on soybeans, and Canada, which is a potential supplier of crude oil — will ask whether new commitments to purchase U.S. goods and services come at their expense. In the immediate aftermath, other countries may complain; over a longer period, they are likely to emulate. The erosion of a market system of international trade is sure to cause distortions, lots of favoritism, and inevitable corruption,” according to Gary Clyde Hufbauer from the Peterson Institute for International Economics (PIIE).

If China were to reduce the import of a product from a country in order to meet its U.S. commitments, the affected country can take legal action against Washington and Beijing, according to the World Trade Organization. Businesses in the U.S. also risk shrinking their markets and becoming even more dependent on China.

For instance, to meet its target of US$32 billion in agricultural purchases, China might end up buying the bulk of U.S. soybeans. As a consequence, exports to other nations might be cut down, which would force these countries to secure supplies from somewhere else. And if in the future China decided to “punish the U.S.” by cutting down soybean imports, American farmers will be left without having any significant market to export to.

On the plus side, the trade deal will definitely ease tensions in the markets. “We can see from the data that the U.S.-China trade friction affected both countries’ economic growth, which in turn dragged down the world’s performance,” Liu Zhenmin, UN Under-Secretary-General for Economic and Social Affairs, said in a statement (Shine). According to a UN report, the world economy grew by just 2.3 percent in 2019, the slowest in a decade. Global trade growth declined to just 0.3 percent during this period, which is the lowest in 10 years.

Another plus point is that China has pledged to enact stricter intellectual property (IP) protection laws. This should come as good news for Western tech companies who have been suffering for a long time due to IP theft by Chinese groups. However, it remains to be seen how sincerely and effectively the Chinese government tries to implement such a commitment.

If purchase quotas were not made mandatory, it might have been a better deal. The U.S. would have definitely come out better if they had forced China to open up its markets to more American products while ending the state subsidies provided to local companies. Unfortunately, these issues were never addressed. Besides, China has been manipulating its markets and currency for a long period of time. The concept of a free market gives benefits when all players follow the rules. China broke them first. Now, the U.S. is forced to follow.