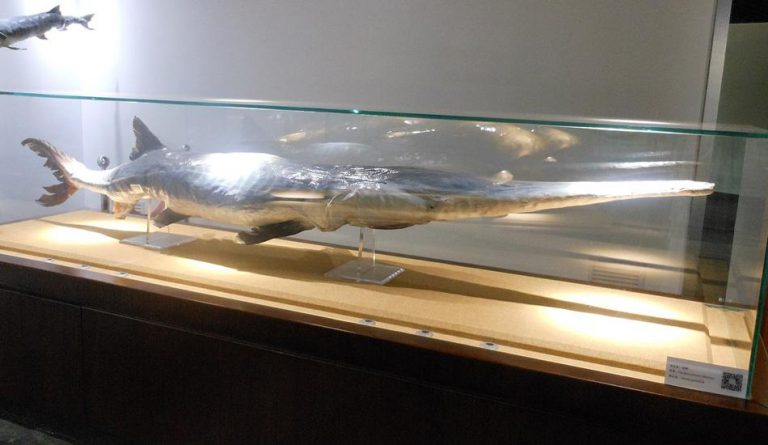 Chinese paddlefish, which reached up to 23 feet in length, have become extinct according to a recent paper published in the journal Science of the Total Environment. The species survived on Earth for almost 200 million years and was driven to extinction due to human activity.

Chinese paddlefish were native to the Yangtze and Yellow River basins in China. In the last century, their population started to decline sharply due to overfishing. During the 1970s, almost 25 tons were being harvested every year. The final nail in the coffin was the construction of the Gezhouba Dam on the main stem of the Yangtze.

“This dam, which was constructed without a fish ladder or bypass, cut off the paddlefish from their only spawning grounds upstream, which had only been discovered in the late 1970s. Populations of the fish continued to dwindle after the 1981 dam construction… the fish had become functionally extinct by 1993, meaning there were not enough fish to meaningfully reproduce,” according to National Geographic.

In 2002, a female paddlefish was captured with the intention of using it for captive breeding. However, it died in about a month. The following year, the author of the paper caught another, attached a tracking tag, and released it back into the waters. But within hours, the signal was lost. It was the last one anyone has ever seen.

The paper estimated that the fish went extinct sometime between 2005 and 2010. To arrive at such a conclusion, the study team checked out hundreds of locations in the Yangtze River region. A mathematical model based on the previous population and frequency of sightings ended up confirming the fish’s disappearance.

“The extinction of the paddlefish is a huge loss and reflects the critical status of the Yangtze River ecosystem… The ecology of the Yangtze River is close to collapse due to human activity in past decades… China has launched its campaign trying to recover the Yangtze River’s environment, and some ambitious policies have been introduced, such as the 10-year ban on fishing activity,” Pan Wenjing, a forest and oceans manager at Greenpeace East Asia, said to Independent.

A decade of extinction

Several creatures have gone extinct in the past decade. The northern white rhinoceros saw its last male member die in Kenya in March 2018. Since only two old female rhinos remain, the species is considered extinct.

In January 2019, the last Hawaiian Tree Snail died while in captivity at the age of 14 years.  “There were once dozens of species of tree snail on Oahu, nearly all of which had very beautiful and in some cases ornate shells… Many have gone extinct and nearly all have become very rare because of habitat destruction,” Noah Greenwald, the endangered species director at the Center for Biological Diversity, said to Vox.

In 2012, the world’s last Pinta tortoise, popularly known as “Lonesome George,” passed away. He was over 100 years old and was discovered by conservationists in 1972. Native to the Galapagos Islands, the Pinta tortoises were mostly decimated in the early 19th century with the arrival of a large number of explorers and whalers.

According to the United Nations Intergovernmental Science-Policy Platform on Biodiversity and Ecosystem Services, almost 1 million species are currently at risk of extinction, with 40 percent of them being amphibians, 33 percent corals, and about 10 percent insects.