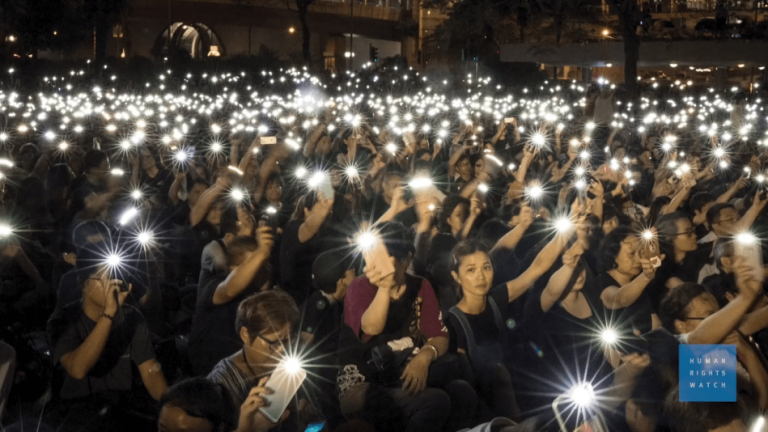 Kim genuinely believes that human rights in China are not only a matter for the Chinese people but for all mankind.(Image: Screenshot via YouTube)

Human Rights Watch (HRW) recently published its World Report 2020, with a foreword by Executive Director Kenneth Roth, blasting China for its increasing human rights violations. It warns that Beijing sees human rights as an existential threat and is reacting in a way that could endanger the rights of humanity on a global level.

“What modest opening had existed briefly in recent years for people to express themselves on matters of public concern has been decisively closed. Civic groups have been shut down. Independent journalism is no more. Online conversation has been curtailed and replaced with orchestrated sycophancy. Ethnic and religious minorities face severe persecution. Small steps toward the rule of law have been replaced by the Communist Party’s traditional rule by law,” according to the report.

Roth points out that communist oppression in China has intensified under the leadership of President Xi Jinping, who is busy building a shameless cult of personality. He has removed presidential term limits and is promoting “Xi Jinping thought” that envisions China as a powerful autocratic country. In a bid to maintain power, the Communist Party is attacking all dissidents who are engaged in exposing the ill effects of the Chinese regime. Worried about uncensored debates and afraid of subjecting itself to public scrutiny, the Party has enforced a strict surveillance system to ensure that the media reports only the positive aspects of Beijing’s rule.

Roth believes that Beijing’s rising attacks on human rights stem from its concern over slowing economic growth. “The Chinese government, in our view, relies on oppression to remain in power. In light of slow economic growth, and as a reaction to it, China went further than usual in the use of its economic and diplomatic ability in exporting internal control abroad. Especially in terms of attacking United Nations organisations defending human rights, a matter which threatens the global system related to these rights,” he said to The New Arab.

The report goes on to highlight China’s persecution of the Uyghur ethnic minority in Xinjiang, restriction of religious freedom in Tibet, increasing interference in Hong Kong’s administration, attacks on human rights defenders, curtailing of freedom of expression, the establishment of mass surveillance, poor record on women’s rights, and so on. Recently, Roth was blocked from entering Hong Kong. The Chinese government accused organizations like Human Rights Watch of creating chaos in Hong Kong even though the only thing HRW did was to highlight the brutality of the Hong Kong police and the real state of the city’s declining freedoms.

A group of bipartisan U.S. lawmakers has released a report asking the U.S. administration to sanction China for engaging in human rights violations and political influence operations in foreign nations. The report was prepared by the Congressional-Executive Commission on China, led by Senators Marco Rubio and Jim McGovern.

The commission recommended that “Congress should require U.S. universities, think tanks, and nongovernmental organizations to disclose major gifts from foreign sources and expand scrutiny of Chinese government influence in American classrooms via student groups and on-campus organizations such as China’s state-funded Confucius Institutes,” according to The Washington Post.

The commission asked the U.S. government to develop global alliances so as to restrict China from exporting its authoritarian policies and surveillance technologies worldwide. It also recommended limiting Chinese companies from accessing sensitive technologies and U.S. capital.