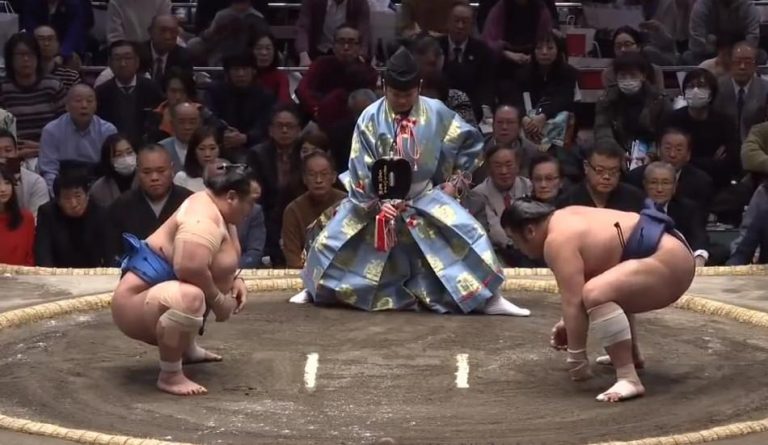 Sumo is one of the most popular traditional sports in Japan. (Image: Screenshot / YouTube)

Sumo is one of the most popular traditional sports in Japan. Ryogoku is basically the center of the country’s professional sumo wrestling world. And in this city is located the Hananomai, the only sumo-themed restaurant in the region.

“Hananomai’s menu is sumo inspired, serving their own rendition of chanko-nabe or ‘sumo stew’. You might want to be wary of that one, however; chanko-nabe is eaten by professional sumo wrestlers as part of a weight gain regimen. Hananomai takes visitors back to the Edo Period when sumo culture flourished. The décor includes sliding screens and antique-styled storefronts with tiled roofs, and artwork made in the Japanese woodblock print style,” according to The Culture Trip.

In the middle of the restaurant is a real sumo ring that is not only used by sumo wrestlers but also singers and other performers to entertain the guests. Prepared by the Japan Sumo Association, it has the same specifications and size as the rings that are used for professional sumo tournaments. Once in a while, sumo matches are also held. But most of the time, you will be serenaded by the traditional songs usually sung at sumo tournaments, called the “Sumo Jinku.” They are performed by former top-ranking sumo wrestlers.

All food is prepared just before serving. Seasonal ingredients are used in the restaurant and fish is served the same day it is bought. The restaurant also pays tribute to the “Shinsengumi,” a band of samurai warriors from the 19th century who were responsible for controlling the anti-shogunate forces. “This restaurant is located where Ikedaya Inn once stood, which was the setting of the ‘Ikedaya Incident’ in which the Shinsengumi made a raid on the emperor’s faction. The great staircase of Ikedaya Inn is also reproduced inside the restaurant,” according to Chimney.

If you wish to explore themed restaurants in Japan, Hananomai is not the only one. In Shibuya, the Alcatraz E R restaurant is famous for its prison and hospital theme. When you walk in, you will be handcuffed by the waitress and put in a prison cell. You call the staff by tapping the bars.

Baratie is a restaurant located in Odaiba and is a favorite of many manga fans. “It is a restaurant with the theme of the popular manga One Piece. A restaurant orientated towards children and families, but with a complete menu that changes regularly… You also have the opportunity to be photographed with the life-size characters of One Piece,” according to Japan Experience.

Next to Osaka’s Universal Studios is the Universal City complex where you can find the city’s most popular dish, takoyaki, which is usually made from octopus meat. The theme park is filled with characters inspired by the takoyaki. They also sell frozen takoyaki in case you want something cold in your mouth.

Little BSD is located in Akihabara, considered the mecca for otakus or young people obsessed with popular culture and having poor social skills. The restaurant waitresses dress up as popular manga characters and even adopt their personalities. If you are a manga or anime fan visiting Japan for the first time, Akihabara and Little BSD are must-visit places.

Ramen is the most popular Japanese dish in the world. As such, it wouldn’t make sense if you didn’t explore the ramen options offered by Japan. Head over to the Shin-Yokohama Ramen Museum and you will find various flavors of ramen, including regional styles.