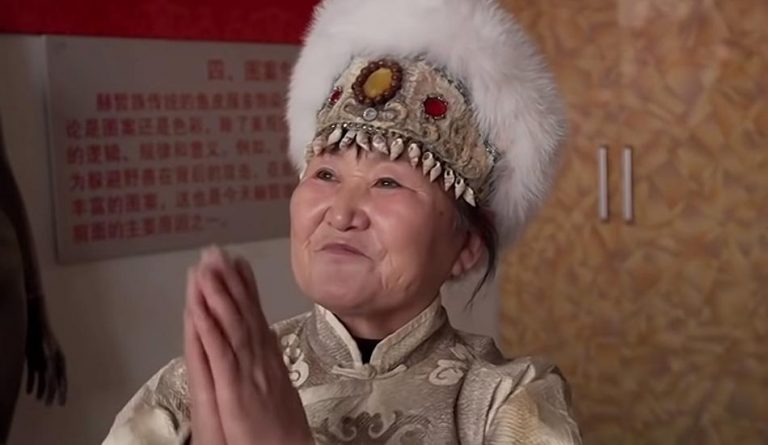 The Hezhen tribe is known for making clothes from fish skins. (Image: Screenshot via YouTube)

You most likely have worn clothes made from cotton and wool. But have you ever seen a dress made from fish skins? Such clothing from fish does exist and it is still made by a remote Chinese tribe called the Hezhen.

In the 1990s, the Chinese government launched a census to identify and catalog the native crafts and arts of the country. In 1996, the Ethnic Costumes Museum of the Beijing Institute of Fashion Technology came across a set of clothing from fish skins. The curator of the museum, Yang Yuan, decided to unravel the mystery of the dress creator and ended up in a Hezhen settlement. There, Yang met an old woman, You Cuiyu, who admitted that she knew how to create such clothing from fish.

However, she was unable to find sufficient fish in the freezing weather, and couldn’t show her visitor how to make a fish skin coat, so Yang Yuan returned that summer, and waited at a dock for a week to collect the required amount of fish, which she brought to You Cuiyu. She watched You process them to produce a leather-like substance and then turn that into a gown, according to China Today.

After You Cuiyu died, her daughter You Wenfeng carried forward the tradition of making clothing from fish. Wenfeng had learned it from her mother when she was 15 years old and was quite skilled in the craft. In 2006, the Hezhen method of dressmaking from fish skins was listed as a national cultural heritage. Authorities promoted the craft and Wenfeng was bringing in thousands of yuan through her fish clothes. Her sons and their wives also joined in and the business expanded.

In the olden days, fish used to be caught right from the nearby rivers. “These days, fish are sourced from the marketplace. And instead of tiger bone and deer tendon, embroidery needles and cotton thread are used. A top and a pair of trousers for a woman require 50 fish, and for a man, 56,” according to Reuters.

To create a dress, Wenfeng will first de-skin the fish and dry out the skin. It is softened by passing through a rudimentary press. The entire process takes about a month. The final stage is sewing, which takes an additional 20 days. To keep the craft alive, Wenfeng teaches it to some local Han Chinese women. The disciples are also taught Yimakan, the tribe’s storytelling art.

The Hezhen trace their ancestry to a race of ancient Tartar horsemen. During the Japanese occupation in World War II, the tribe almost became extinct as the population plummeted to just 300. However, their numbers have recovered and they are currently about 5,000 strong.

“The Hezhens have their own language which belongs to the Manchu-Tongusi group of the Altaic language family. Their language has two dialects. As a result of frequent contact with Hans, Chinese is widely used. Only those who are above 50 years old can still speak the Hezhen language. They do not have a unique system of writing and use Chinese characters for written communication,” according to China Tour 360.

The Hezhen practice a form of Shamanism and believe that everything in the world contains a spirit. As far as festivals are concerned, the most popular one is the Wurigong Festival, which is usually observed in June and August and lasts for about three days.