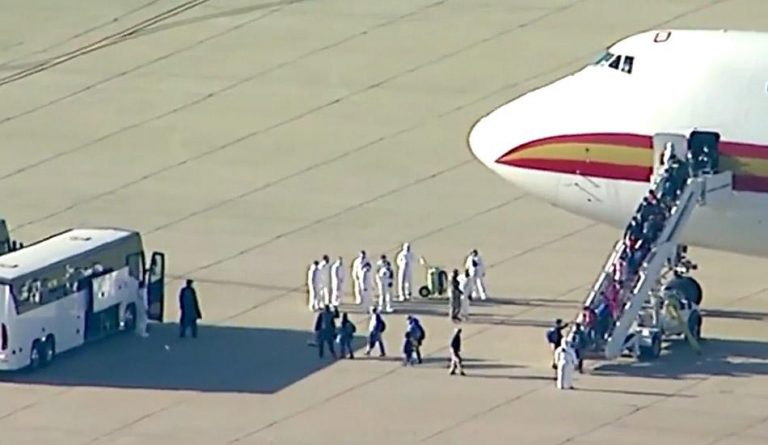 After negotiations between the United States and China, the U.S. started to evacuate its citizens from the epicenter. (Image: Screenshot via YouTube)

About 195 American citizens from Wuhan, the epicenter of the coronavirus, have been evacuated according to U.S. officials. The people are currently in quarantine at a Californian airbase where they are being medically evaluated and will remain for about three days. As the plane landed on U.S. soil, the people apparently “cheered loudly” according to Nancy Messonnier from the Centers for Disease Control and Prevention (CDC).

“So far, no passengers have exhibited symptoms of the infectious disease… Medical personnel will continue to actively monitor the evacuees for up to 14 days — the upper bound of the virus’ incubation period before the symptoms become apparent… At least one person was not allowed to board the flight due to signs of fever… All passengers were “screened and evaluated by medical personnel every step of the way,” including before boarding, during the flight, and when the plane refueled in Anchorage, Alaska,” according to The Epoch Times.

All passengers have reportedly agreed to undergo medical testing since they want to ensure that the infection does not spread into their communities. In total, there were 201 people on the plane, including evacuees, government officials, pilots, and crew members.

Meanwhile, a person who was traveling from China on a Hainan Airlines flight has been detained at Boston’s Logan International Airport. It is not confirmed whether the person is infected with the coronavirus. Though officials wanted to take the person to a local hospital, the individual has apparently refused transportation.

Almost 16 airlines have stopped flying to China, including United Airlines, British Air, American Airlines, and Air Canada. More airlines are expected to adopt this policy as the crisis in China worsens. In the U.S., there have been five reported cases of the Wuhan coronavirus — two from California, and one from Arizona, Illinois, and Washington.

“There is no immediate threat to the general public, no special precautions are required, and people should not be excluded from activities based on their race, country of origin, or recent travel if they do not have symptoms of respiratory illness,” LA County Public Health said in a statement (The Epoch Times).

While the world is racing to find ways to contain the Wuhan coronavirus, the latest reports suggest that China tried to hide details of the infection. A study published in The Lancet points out that the virus actually spread in China earlier than officially admitted.

“The researchers reviewed the clinical charts, nursing records, lab findings, and chest X-rays of the first 41 patients who had confirmed 2019-nCoV infections. Among other things, they reported that the first case of 2019-nCoV wasn’t even linked to the Huanan Wholesale Seafood Market at the center of the outbreak,” according to Vox.

When news of the disease started to spread in late December, Chinese authorities cracked down on people who posted about it on social media. Many were arrested on charges of “spreading rumors.” Journalists covering the outbreak at a hospital in Wuhan were detained for several hours. The police asked them to delete the photos they had taken at the hospital.

More than 6,000 people have been infected by the virus in China. Globally, the World Health Organization reported 68 cases of infection from 15 countries. However, a top British infectious disease specialist estimates that there could be up to 100,000 infected people around the world.